We're up to AA in our whirlwind tour of Reds minor league affiliates. Last year, this team was projected to be terrible and boring, lacking any significant prospects. As it turns out, a number of high-profile guys passed through the organization. Devin Mesoraco, Dave Sappelt, Donnie Joseph, Kris Negron, and Brad Boxberger all spent significant time in Carolina. But yeah, they were still terrible, ending the year with a record of 58-79.

It is kind of the nature of AA ball that guys don't stay very long. The jump between A+ and AA can be a big one, so young players are often held back in A ball. But once a highly regarded player makes it to AA, his stay is usually short. Most organizations rush their top performing AA guys to AAA to see how ready they might be for the bigs. (This is sort of what happened with Sappelt and Mesoraco last season).

With that in mind, what will the lineup look like to start 2011? Can the team play well enough to avoid a second consecutive last-place finish?

The Mudcats play at Five County Stadium, which was opened in 1991. The stadium has a capacity of 6,500, and is located in the suburbs of Raleigh, NC. 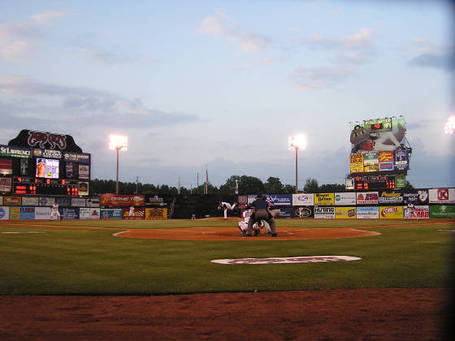 Once again, this looks to be a pretty uninspiring group. The refrain about last year's system was that it was very top and bottom heavy, and this year seems to be the same. There is some talent in Bakersfield, as BK showed us yesterday, but the vast majority of the top players are either in Louisville or Dayton, with a few sprinkled into Rookie ball. As the young guys progress this should even out a bit, but for 2011 it looks like it will be another sub-par year for manager David Bell.

Not a single one of those starters does anything for me. Daryl Thompson will be great for about 3 months until his shoulder explodes, Dallas Buck is doing his best to remind us just how crappy the return was for Dunner, and the other three have limited upside, but certainly nothing to get excited about. The bullpen has some very good arms in it, Boxberger and Joseph most notable among them, but they can only be so effective when they enter the game down 4 runs.

The lineup is a bit better. Neftali Soto has done his best to take himself out of the prospect conversation (and the organization has helped, trying him at 3B, 1B, and C), but he's still young and could still put it together. Felix Perez is way too old to be toiling in AA, but he'll play a good CF and get on base a fair bit. Cody Puckett is the most intriguing player on the team for me. After spending his first three seasons primarily at 2B, he figures to get most of his time in the OF this year, where his defense should be better. He has legitimate pop (19 HR in 2009 and 18 last year) and has decent on base skills. Still, he's 24 and has struck out 318 times in 312 career games, so we're not talking about a sure thing.

Ultimately, this roster doesn't mean much, as the better players will likely be headed to Louisville before too long, and the team could receive a boost from guys like Yasmani Grandal and Ryan LaMarre around midseason as well. But as it is currently constructed, this roster will likely have a hard time putting together a winning season.