Next in line is the newest member of the Reds family, the Class A Advanced Bakersfield Blaze.  The Blaze will be the Reds' first affiliate in the California League since 2002, when such luminaries as Josh Hall, Dustin Moseley, and Stephen Smitherman led the Stockton Ports to an 89-51 record and the Cally League championship.  The Blaze will try to continue that tradition.

The bad news?  Most of their players come from a Dayton team that went 53-85 last year.  Still, there's a few interesting names here, so let's dive into what the west coasters and night owls can expect to see when they're watching Blaze games after Reds wins.

A little retro logo action to get us started...

The Blaze play at historic Sam Lynn Ballpark, which opened in 1941.  In its 70 seasons, the ballpark has hosted names like Don Drysdale, Mike Piazza, and Pedro Martinez.  Will we able to add Yasmani Grandal to that list? 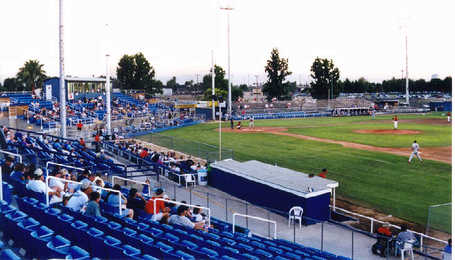 First off, I listed Ravin/Villarreal as the 5th starter because Ravin wasn't on the roster that the organization sent out but he's listed as active on the team's website.  If he's healthy, he's in there over Villarreal.

Grandal is the big dog in this lineup, but I think we'll see more punch out of the top of the order than you'd think with Hank-Rod, Means, and maybe Greene setting the table.  Chris Richburg quietly hit 19 homers last year over two levels, and LaMarre was another solid bat that will likely make this an above-average lineup.

Unfortunately, the pitching.  There are a couple of interesting guys in the bullpen (Bowman, Ware, Thurman, Chiu), but that rotation is really rough.  If Ravin is in there, I think he's the best bet to have a good year.  Sulbaran has the most upside there, but has been in the organization for a little while and is still yet to put anything together.  This is a staff that will likely improve if they get help from Dayton or Carolina.

The best bats on the bench will likely be catcher Mark Fleury and Jose Gualdron, who have both been solid in Dayton.  They'll be joined by RR favorite Chase Weems and two guys who are new to the organization in outfielder Wellinton Ramirez (an outfielder out of the DR who played for the Jays organization previously) and Eric Campbell (former Braves 2nd round pick who played in independent ball last year).

Overall, I think this is a team who will go as far as their pitching take them.  They'll need the guys they have to be better than they've been to contend, but the offense will be solid and there will be a couple of fun prospects here to follow.