The last pitcher that I think will make the rotation is Travis Wood.  The big surprise last spring was that Wood lost the competition for the #5 spot in the rotation to Mike Leake.  But he did what he could do: went down to Louisville, pitched very well, and then pitched superbly when he was called up mid-season.  Let's see what he throws: 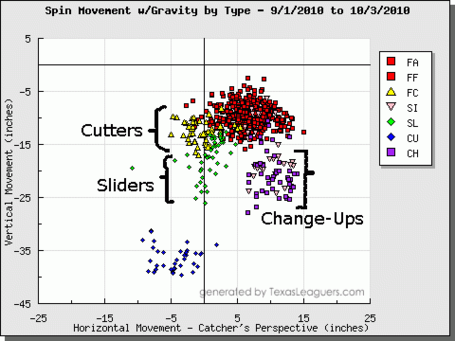 Why doesn't MLBAM's pitch algorithm just work?  I know it's a difficult task, but this is pretty bad: there are numerous, obvious problems in the classification of pitches once again.

Let's start at the bottom-left and move up.  At the very bottom you see his curveballs.  At least some of them are a spiked curve as opposed to the traditional grip, based on the photo here.

Moving up you see sliders (initially correctly classified), and then you move into Wood' cutter territory.  Wood learned his cutter from Cliff Lee, with whom he works out in the offseason,   I think a good number of Wood's cutters are misclassified as sliders--essentially everything with a vertical movement over -16 inches or so in this plot.  I was initially skeptical that he even threw a slider, but Harry Pavalis seems to think that he does, Wood says he does, and that lower cloud of sliders does seem distinct enough to support the idea.  The grip on a typical slider is basically indistinguishable from a typical cutter--the difference is supposedly in how you twist your wrist as you throw the slider.  You can see that grip in the picture of Wood above.

To the right of the cutters are his four-seam fastballs, though I again think that some of those pitches might actually be misclassified cutters--especially those with negative horizontal movement.  Amongst the four-seamers, and especially as you move into the change-up area, you start to see a number of pitches identified as two-seam fastballs (sinkers).  The ones down in the change-up area (denoted with brackets) are clearly misclassified.  And some of the ones denoted as change-ups but that are above the brackets are probably also incorrectly classified.  I haven't found photos of him using the grip (maybe this??), but he does apparently throw a two-seamer (at least as of 2009).  I'd wager that a good number of the "four-seamers" on the far-right of the four seam cloud are actually two-seamers/sinkers.

In short, the pitch classification by MLBGameday is a mess.  Maybe someday I'll sit down with all of his pitches from 2010 and try to reclassify them by hand...but today is not that day.

Wood doesn't throw particularly hard, but his fastball can edge up toward 94-95 at times, while averaging just shy of 90 mph.  His cutter is delivered in the high-80's (and you can see all of those green dots in the fastball cluster--I'd bet money that those are all cutters).

His change-up, which when he was drafted was considered one of his best pitches (before the development of his cutter), leaves his hand in the high-79's, which means there's often a 10+ mph difference between the two pitches.  I don't know about deception and such, but that velocity difference is on par with what Volquez does with his change-up.

With the massive caveat that the data are almost certainly flawed because the pitch classifications are so badly off....

Given all of the misclassified cutters, I'd guess that he actually throws 15-20% cutters (some are grouped with sliders some with four-seam fastballs).  I swear I've watched games where he threw nothing cutters and fastballs (to my totally incompetent eye, anyway).  Anyway, in terms of those pitches that are actually classified here as cutters, it looks like an outstanding pitch, with well above-average swing-and-miss rates.  Depending on how the breakdown goes with sliders vs. cutters, it may actually induce ground balls at a good rate as well. Some of the pitches in the slider group certainly do!

His change-up also looks to be pretty good.  There is classification trouble here, but on the surface it looks to get a decent number of whiffs--although not as many ground balls as some other change-ups I've seen.  The curve ball looks not so good--very low whiff rate, and it's also a pitch that he doesn't seem to get over the plate very often (though perhaps that's by design--hard to know). He throws it rarely, however, so it may work as a "show me" pitch.

His four-seamer, on the other hand, does not look as good.  If there's one concern I have for Wood performance-wise from looking at his peripherals, it's his ground ball rate, which was a measley 30.5% last year.  He managed to get by with a well below-average 6% HR/FB rate last year, but that number may be pretty tough to repeat--especially pitching in GABP.  And the problem may well be his fastball, which induced ground balls just 24% of the time last year.  One thing we may see, if Wood starts to get lit up with the long ball, is that he'll start throwing his other pitches more: 63% fastballs, if accurate, is pretty high for someone with excellent secondary pitches.  That hopefully should increase the number of grounders that he gets.  With the success that he had last year, however, it's hard to argue that he should change his approach until something happens.

Aside from the curve balls, Wood appears to have excellent command of all of his pitches, which matches his history of excellent (<3 bb/9) walk rates over the last two years of his career.

Starting with LHB's this time because that's his same-handed side.  Against lefties, throughout the count, Wood mostly used just two pitches: fastball and cutter (and maybe some sliders).  He did mix in a curve ball to start a hitter or try to put one away (maybe a "wasted" pitch?), but for the most part it's cutter or fastball.  His incidence of "sliders" jumps way up with two strikes, and it wouldn't surprise me if a lot of those really are sliders--but I don't have a good way to sort that out right now.

In 3-0 counts (Behind), he threw nothing but fastballs.  The other 33% were intentional balls.

Against righties he does break out the change-up with decent frequency.  That's especially true when starting a batter, or (surprisingly) when in a 3-0 count on a hitter.  Apparently, he does feel like he can control it.  I'm a bit surprised to see that he doesn't use it more often in two-strike situations, but there he again goes back to his cutter, which should move in on the hands of a right-handed batter.

Travis Wood became one of my favorite Reds pitchers last season.  I have a thing for cutters.  His ability to use it to great effect against lefties, as well as righties, along with the quality change-up, makes him a great choice for the rotation.  Teams like to include a left-hander in the rotation, which makes me thing he's likely to make the cut.  I don't know if he can maintain a mid-3's ERA given his high fly ball rate, but he also may be able to make adjustments to get there.  I'm looking forward to watching him pitch this year.