And now a look at everyone's favorite underdog, the Philadelphia Phillies

Share All sharing options for: And now a look at everyone's favorite underdog, the Philadelphia Phillies

The good: The Phillies survived injury-plagued performances from Ryan Howard, Chase Utley and Jimmy Rollins with career years from Carlos Ruiz and Jayson Werth, not to mention a Cy Young season from Roy Halladay. Cole Hamels and Brad Lidge shook off their 2009 hangovers with rebound seasons, and Roy Oswalt pitched out of his mind after a deadline trade by the Astros.

The bad: The Phillies blew by the Reds in the LDS and looked to walk into the World Series, but they ran into the hot Giants. It can make for a long winter when your season ends with the bat on the shoulder of your supposed franchise player.

The bullpen isn't nearly as impressive, but relievers are also much harder to predict so I'm not going to go into significant detail. Brad Lidge, Ryan Madson, and Jose Contreras have solid track records as good major league pitchers. Canadian Scott Mathieson has a live arm and finally looks to be healthy after a long Tommy John rehab. Antonio Bastardo is more of a lefty Mike Leake-type, but will shrug off heckles about his mother.

The offense is interesting. Having finished first or second in the league in runs for at least five years running, the lineup looks to be entering their sunset phase. Seven of their eight starters will be at least 30 on Opening Day, though only two will be 35 or older. The team figured to get younger in rightfield with uber-prospect Domonic Brown, but he recently broke his hand and will be out for at least the first several weeks. 29 year-old Ben Francisco will now probably be the starter.

I think the offense will decline but will still be among the better ones in the NL in 2011. The larger age-related declines will likely come later. The Phillies should see regression this year from Carlos Ruiz (302/400/447, 128 OPS+ last season) but a bounce-back from Shane Victorino, whose down year (259/327/429, 102 OPS+) was largely due to a .273 babip (forty points lower than his prior career average). It's also worth noting that Jayson Werth's 145 OPS+ season was light in high leverage situations (186/353/314 with RISP), meaning that his actual offensive production is more replaceable than appears at first glance.

The bigger question is what to expect from the Howard/Utley/Rollins trio. I think a small rebound or at least a repeat of the same is likely. They are all either 31 or 32, so it's not as if immediate further decline is a sure thing. The trio tallied 8 bWAR last year after earning 13 the prior year. Figuring on at least a repeat of 2010's figure is reasonable.

Health will be the determining factor. Last year Howard had an ankle injury, Rollins suffered from a bad calf and hamstring, and IIRC Utley hurt his hand will sliding into second against us. Howard looks to be fully healthy and Rollins will most likely play more than the 88 games he was in last year. But Utley is the real linchpin of the offense, and questions about his knee make any kind of prediction tricky. Last year he missed almost 50 games and hit well but below his norm (124 OPS+ in '10 versus 134 from '05 - '09). Now 32, he's entering a period in his career where other star secondbasemen abruptly declined (Roberto Alomar was done as a good player after 33; Ryne Sandberg had his last good year at 32). When you consider his knee issues, age, unspectacular athleticism, and his aggressive style of play (e.g., he led the NL in HBP from '07 - '09), it's hard to imagine Utley returning to the superstar he was. The Phillies should be content if Utley settles in as a four-win player rather than the seven-win star of his prime.

The Phillies were 5-2 against the Reds last year, but the games were close. Philly outscored the Reds by only three runs collectively. The Reds took two of three at home in late June but then turned around and dropped four in a row in Philly right before the ASB, including a game on July 10th when Travis Wood took a no-hitter into the 9th. On the positive side, my little girl got to see her first game.

The teams played three other games in October that you may or may not recall. The Phillies took all three, just as the Reds did against the Phillies in the 1976 LCS.

This year, the Reds will play a four-game series in Philly in the middle of the last full week in May. The Reds will host Philly during the last week in August.

Placido Polanco is my official Bill Hall All-Star of the Phillies for hitting 329/356/458 against Cincinnati - about 70 OPS points higher than his norm. I can't really pick a Tomo Ohka AS from such a glamorous rotation, but it's worth noting that Cole Hamels is the new Roy Oswalt. In seven starts against Cincinnati, he's 6-0 with a 1.07 ERA in 50.2 innings. That doesn't include the shutout he threw in game 3 of the LDS.

Jim Edmonds Designee for RR Vitriol: Last year I would've picked Jayson Werth, though I'm not sure why he seems to get the hate. Dude's a good player, and anyone who's stolen home gets a pass in my book. I'll go with Ryan Howard because his ridiculous contract may very well have priced a long-term Joey Votto deal out of the Reds' budget.

I've seen the Braves mentioned as a sexy underdog pick, but I think it's based mostly on backlash against the Phillies. 97 wins seems like a fair over/under. This is the ultimate win-now team with a lot of money committed to older players who are still good. But are they an all-time great? Some of the internet boastings seem premature. 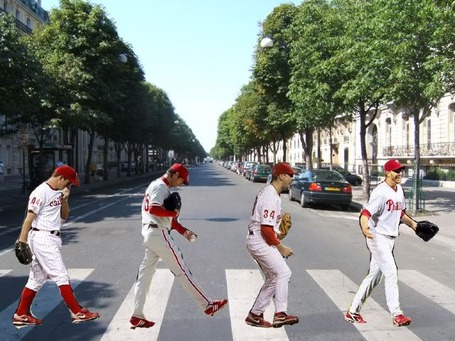