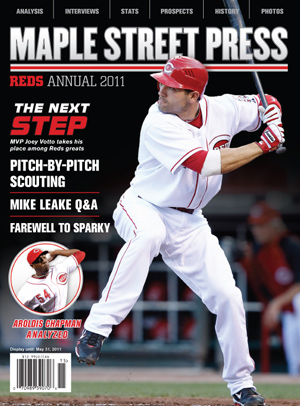 You've heard quite a bit around these parts about the upcoming Reds preview that we put together this winter with the help of Maple Street Press. I know you've been waiting in great anticipation to finally get your hands on a copy too. Well, your wait is almost over as Maple Street Press is finally taking pre-orders for what should be the greatest and best Reds annual ever put together by a set of bloggers for the 2011 season.

The Annual is packed with some of the best Reds writing I've seen in a long time. The variety of authors involved, many from Red Reporter, really brought their A-game on this project. I'm not saying this just because I want you to buy the magazine. I'm saying this because you NEED to buy the magazine. It truly is an interesting collection of great Reds writing. And it all looks great too with some outstanding photography provided by Getty Images.

So go place your order today! If you live in the Cincinnati area, you'll find the magazine in your local grocery or book store once it hits newstands in March. That will be a great opportunity to buy six more copies for friends and your future grandchildren.

After the jump, I'll have a little preview of each article so you know what you are getting.

Repeat Image by Joel Luckhaupt
I give a little preview of next season and remind everyone that repeating is even harder than winning in the first place. I'm fun at parties too.

2011 Reds Player Profiles by Joel Luckhaupt
In depth profiles of every key player on the Reds for the upcoming season plus some interesting stats and breakdowns of what makes each player successful (or a failure).

Back To Winning by Justin Merry
Justin breaks down the entire 2010 season as only Justin can. As always, you'll learn something about last year that you never knew that you didn't know.

This And That by Josh Shreve
Some weird stuff happened in 2010. Josh takes a look at the ephemera of the season gone by.

Standing In Their Way by Joel Luckhaupt
In case you haven't noticed, the NL Central is better in 2011. A look at the challenges the Reds will face in 2011.

Ten Keys To 2011 by Chad Dotson
Chad identifies the 10 things that may be most important to success for the 2011 Reds.

A Dream Come True by David Laurila
A Q&A with Mike Leake about his 2010 season and what he needs to do to be successful in 2011.

Dusty's Road by Ken Massey
An awesome analysis of Dusty Baker's tendencies and whether his various reputations are deserved.

The Cuban Missile by Brandon Kraeling
A little Pitch-fx never hurt anyone. BK examines how special Aroldis Chapman is.

Sustainable Farming by Geoffrey Taylor
An interesting look at the fact that the majority of the successful teams for the Reds over the last 4 decades have been built from within.

Avoid Ugly Contracts by Gray Kimbrough
Another key to success is to not have your roster burdened down by shitty contracts.

A Portrait Of The Hitter As A Young Man by Kris Vigneron
In case you haven't noticed, Jay Bruce is growing up right in front of us. Kris profiles the Reds' right fielder.

Touch 'Em All by Larry Granillo
The Tater Trot Tracker breaks down the Reds' season in home run trots. The Reds were even good at that too.

Keystone Consistency by Mark McKinniss
Brandon Phillips' season lines have become rather predictable, but that doesn't mean picking up his 2012 option should be a given at this point.

Factoring The Ball Park by Justin Merry
Is GABP really a hitter's haven? Justin breaks it down completely and finds out.

The Future's Still Bright by Geoffrey Taylor and Brandon Kraeling
A look back at every minor league season for the Reds organization in 2010.

Reds Top 20 Prospects by Geoffrey Taylor and Brandon Kraeling
Yeah, the title of the article sort of gives this one away.

The Global Arms Market by Josh Shreve
The Reds are making a big dent in international scouting. Josh examines how they are getting it done.

Saying Goodbye by Brendan Cartwright
A fitting tribute to the greatest manager in Reds history.

You Never Know by Mark McKinniss
This season is the 50th anniversary of the start of the greatest stretch of baseball in Reds history. Mark looks at how it all started.

Too Much Young Pitching? by Greg Gajus
Feel like the Reds have too much young pitching and should trade that depth for other needs? Greg has a cautionary tale from our very own organization.

Baseball's True Iron Man by Ken Massey
Pete Rose doesn't get enough credit for how awesome he was after he turned 30 years old.

Best Of The Best by Chris Garber
Joey Votto became the 10th player in Reds history to win an NL MVP. Chris checks out how his 2010 season stacks up against the other past winners.