Today we turn our attention to Johnny Cueto.  Cueto had a big year last year, and at least in terms of his ERA seemed to take a step forward in his development (though his peripherals might disagree...).  But today, I'm not here to tell you how good he--I'm trying to describe how he goes about being however good he is!  Let's look at his pitches. 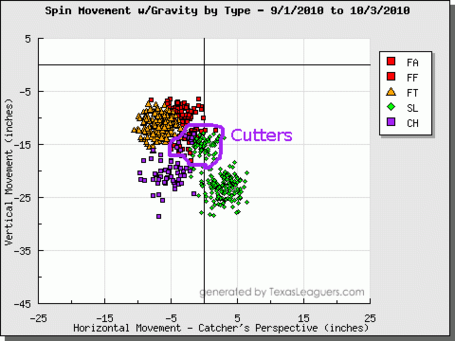 As Mike Fast pointed out in my last piece on Cueto, MLBAM was consistently not classifying Cueto's cutters correctly.  They are right in the middle of the plot, and I've outlined them in the graphs.  It looks like most of the cutters are misidentified as sliders, though some may also be mistakenly labeled as change-ups.  This means that the stuff below on pitch selection, etc, is going to be screwy, as I don't have the facilities to correctly classify those pitches and get the data.

In any case, beyond a cutter, Cueto also throws two-seam and four-seam fastballs, a change-up, and a slider.  The slider looks a bit "low" in the graph, but that's because I'm showing the gravity one--helps make his change-up pop out more.  It's a normal looking slider. 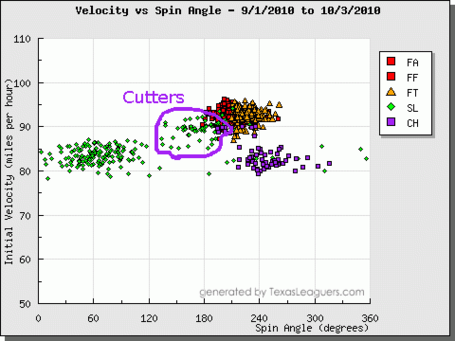 Cueto has an above-average fastball, averaging 93 mph and occasionally hitting 96 or 97.  Speaking as a fellow 5'10" male, that's pretty impressive velocity for guys our size!  Cueto's cutter comes in a bit lower (~89 mph), while his slider and change-up both leave the hand in the low 80's (though they break in opposite directions).  The average velocity difference between his fastball and change-up is 9 mph, which isn't quite as good as Volquez's difference...but it's still probably at least average.

With the qualification that some sliders and some change-ups are actually cutters, we get some idea of what makes Cueto tick here. He seems to rely on his fastballs and sliders primarily, mixing in change-ups more occasionally.  The two-seamer does not appear to do much for ground balls.  It's better than his four-seamer, but this is not a Brandon Webb sinker here.  Both pitches have above-average swing-and-miss rates, however, so that gives him good reason to go to those pitches.

His secondary offerings, however, seem to be pretty good at inducing ground balls.  The only problem there is that they are not particularly good in terms of whiff rates.  So we have a trade-off: the off-speed pitches can induce ground balls, but his fastballs can be used to record strikeouts--and probably can also be used to avoid walks.

Against right-handers, Cueto largely ignores his change-up.  He's pretty even with which of the other pitches he will use to start off a hitter, but with two strikes he goes for the slider almost half of the time--he does seem to consider that to be his out pitch.  In 3-0 counts, he throws fastballs pretty much exclusively.

Here's where that Mario Soto change-up is used: against opposite-handed hitters.  As noted in the Volquez report, it's hardly a secret around baseball that the change-up is one of the best weapons against opposite-handed hitters.  Some change-ups actually show a reversed platoon split, while others at least don't show much of a split at all--which is more than you can say for most other pitches!

Interestingly, while he'll start a lot of lefties off with a change-up, Cueto still seems to go to the slider when he's trying to strike left-handers out.  And with a full count, he really seems to rely on the slider, while diminishing the frequency of the two-seamer and the change-up.  And when he's about to walk someone, he still goes for his fastballs.  (Also, quick note: the reason that his "Behind" numbers don't add up to anything close to 100% is that there were a bunch of unclassified pitches thrown in that count--maybe they were intentional walks?  Dunno.)