Share All sharing options for: Red It, Watched It, And Wept - Week of 12/9

It’s been another fantastic week here at RIWIAW Offices. Between trades free agent signings the Rule 5 Draft the Minor League Rule 5 Draft, we finally have some new faces here in Cincinnati. Let's welcome all of them him!

This weekend’s Redsfest drew over 23,000 fans for the two-day event. In case you were wondering, here’s a small sample size of some of the things people were talking about at the Duke Energy Convention Center during the event:

"Ron Oester should be the manager this year."

"We should bring Cordero back only if he will pitch for $100,000. Every penny over is a waste of money. I could save more games and give up less one-out hits."

"Can I interest you in a slump buster?"

"Do you have any autographed photos of Danny Graves’ last outing as a Red?" - Me

Sometimes, the sheer absurdity of actions taken by baseball general managers kills any ability for us at RIWIAW to be snarky. This line was crossed today when the Reds hired Jim Riggleman to manage their AA team. To jog our memory, Riggleman was the guy who quit stepped down quit in the middle of the season while managing the Nationals. If that doesn’t set your heart a-thumpin’, he’s also known for making sure Kerry Wood was nice and broken-in before Dusty Baker got a hold of him.

Monday: Youth Not Wasted on Young

We here in the RIWIAW Department at Red Reporter (we have a latte machine now!) don't mind stability and consistency. Heck, it's why there's a .gif thread on this site going on 2 weeks strong. However, when we run low on original content, we look to the outside world for people to make fun of ideas. One would think that there should be plenty of fodder this week from the MLB Winter Meetings. Buy hey, it's the Reds we're talking about! The marquis name being tossed around regarding the Reds at the 1997 2011 Winter Meetings? Dimitri Young.

Tuesday: What the Frick?

Fans have engaged in several efforts to rightfully place Joe Nuxhall alongside the greatest announcers in baseball history (and Marty) as a recipient of the Ford Frick Award. Unfortunately, each of these endeavors has come up short. This year, instead of awarding it to Nuxy, the baseball Gods cabal group of old men from the two coasts have awarded the Frick to Tim McCarver. Now, we here at RIWIAW don't think McCarver is an idiot or a bad announcer (placing us in the minority of baseball fans), just extremely pretentious without reason. That's okay though. I'm sure his induction is just to prepare us fans for the inevitability of having to mutter the phrase, "Hall of Famer Joe Buck" (immediately followed by the phrase, "what a bunch of crap").

Wednesday: COTW(s) - This is What Happens When The Reds Do Nothing During the Winter Meetings 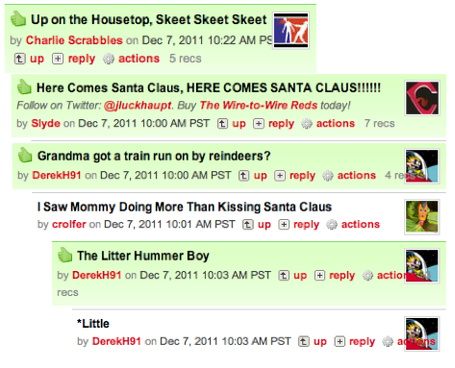 Don't you love those mythic St. Louis Cardinals fans? No matter what happens, their stoic demeanor and high baseball IQ will prevent them from overeating and embarrassing themselves. After all, they are the greatest fans in baseball. Any threats of jersey burnings, player vilification, and other acts of sophomoric humor are simply illusory and outliers. Any acts that could be viewed as remotely embarrassing can only have been performed by Reds fans and Cubs fans acting as Concern Trolls.

We ended up bumping this article, but I probably shouldn't have. If you can, lobby your local baseball writer or annoy them on Twitter.