Saturday: Seeing Red, but not Reds

FOX, ABC, CBS, and NBC have a knack for taking old ideas and making them worse (Jay Leno in Primetime). Now, the network that brought you the glowing puck, has upped the ante on needless graphic improvements with Terrorist Vision Infrared Vision for the baseball playoffs. Evidently, this technology will tell you whether a ball is fair or foul in easy to see grayscale. The camera can also tell whether a ball has hit a player due to the thermal rays emitted. Unfortunately, the technology does not work for machines like Joey Votto.

Going to NPR for sports news and analysis is often like going to ESPN for stock tips: you're likely going to end up with bad information and unreliable advice. However, for every Lenny Dykstra, there is a Robert Krulwich who actually adds some #originalcontent to the discussion. Krulwich studied which family member has the greatest  influence on the team you choose to root for. This may not be big news in Redsland, but every Freudian psychologist in Wrigleyville can now afford a new addition on their house.

When sports writers can't think of anything original to say, what do they create? Lists! What happens when their lists are extremely short on content? Make them into slide-shows! That creates more page clicks! The Dallas Morning News took this approach today and created a slide-show based on the extremely provocative human interest piece that is Dereck Holland's peach fuzz mustache.  If only all of us could be this lazy on Mondays.

This is a no-brainer. One more time, Cy Schourek, with feeling! 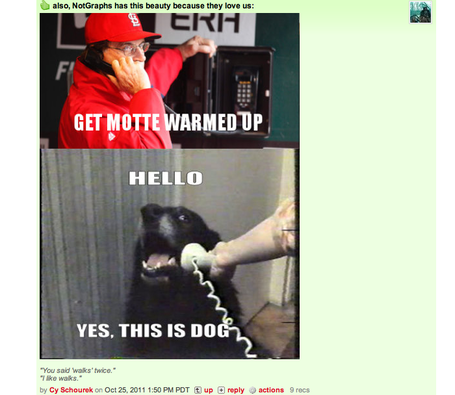 Wednesday: Nothing Compares to Cincinnati Radio

Clear Channel radio stations have been criticized for taking out the art, intelligence, and originality in radio and replacing it with mechanical saccharine formulas. Well, now they can't even get the mechanical parts right! This morning on ESPN 1530 in Cincinnati, the folks at Clear Channel pressed the wrong button and aired the Louisville traffic report. Honestly, nobody would have noticed but for the fact that the reporter mentioned how great Brandon Larson was when he played for the hometown team.

There are a number of legitimate reasons to dislike baseball's all star format. Interleague play has ruined the magic. Free agency renders the league rivalries meaningless. World Series home field makes it too meaningful. Players are chosen based on name recognition and sometimes the dreaded small sample size. Well, we can throw the last reason out the window now that the Sporting News (editor's note: yes, this still exists) has chosen it's 2011 All Stars. In all honesty though, their list is a lot like the 2011 All Star Game roster, just with better third basemen. The good news for Reds fans? Brandon Phillips made the list. Celebrate, Shawties!

In his memoir, "A Drinking Life" former New York Post reporter and Editor of the NY Daily News, Pete Hamill, relays some sage advice given to him early in his journalism career. "Never write that something is a tragedy. You tell what happened and let the reader say it's a tragedy. If you're crying, the reader won't." In that vein, our least favorite team came back from behind last night and may now win the World Series. The most unprofessional, annoying, and downright dirtiest team in baseball is one game away from winning the most important championship in sports. If they do so, it will be due to gamesmanship, creating excuses, and just overall whining.
Good enough for you, Mr. Hamill?

We'll see you next week. Hopefully with less Cardinals news. If you think I can find better ways to occupy my time, let me know! riwiawrr@gmail.com