Hey there, sports fans! It’s time for your weekly biweekly intermittent fix of what happened this week in professional baseball journalism (and Red Reporter). This week, we take a look at our least favorite baseball team (that'll get you to click to see what's after the jump!), our favorite catcher, and one classy individual (for a refreshing change of pace).

Saturday: "Denial Is A River" Jokes Only Work Well When Spoken

Under most circumstances, discussing the Josh Hamilton-Edinson Volquez trade is a depressing thing for Reds fans. Heck, the only thing more depressing is a St. Louis Cardinals #occupied World Series. See? Trading Josh Hamilton doesn't sound so bad after all! So, in an effort to maintain our sanity, let's read more about the trade which, had it occurred a few seasons earlier, would eternally have been referred to as The Trade.

Sunday: When All You Can Do Is Shake Your Head and Comment

Did anything really happen today? I mean, there was football, but that's off-topic. I guess when we’re left thinking this, there can only be one choice for the Comment of the Week:

Congrats, Mads! You win the right to post one completely off-topic and inappropriate thread-killing picture in the comment section!

Tuesday: His Milkshake Brought Jimmy Anderson to the Yard

Early this morning, Cincinnati and Reds fans mourned the passing of former Reds owner and philanthropist Carl Lindner. While the Reds weren’t successful during his tenure as majority shareholder, his contributions were vast enough to consider his afternoon below-the-fold treatment by the Cincinnati Enquirer an insult. Please pay your proper respects by hoisting a UDF malt in his honor today (I recommend hot fudge). 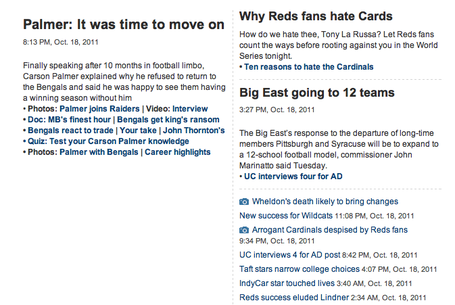 Wednesday: You're Never Listless on Wednesday!

You know what Wednesday means, don’t you? Somebody made a list! Today, it’s Tom Groeschen’s turn to come up with 10 reasons why we Reds fans hate the Cardinals (since when did we need a list?). He lists Tony LaRussa, Chris Carpenter, and Yadier Molina as numbers one, two, and three on the list. However, Reds fans know that TLR, Yadi and Carp are actually 1A, 1B, and 1C. Coincidentally for LaRussa, 1A, 1B, &1C is an anagram of .111 BAC.

Actually, JCH24 called Johnny Bench! In an interview that needs no introduction (quite literally), Bench discussed World Series contests, his new statute and our two favorite catching prospects. Listen to the interview and find out why the greatest catcher ever thinks the Reds' greatest days at backstop may not be behind them. And, if you already listened to it, listen again. Page clicks keep the lights on around here.

Friday: The World Series Brought To You By David Lynch

To kill the question of whether anyone has ever acted upon the suggestion of a sportswriter, Paul Daugherty recommends that we root for those Whiny Little the Cardinals this year. Doc argues that we should look past the fact they are frustratingly annoying human beings because, when it comes down to it,  all they do is win. (Where have we heard that before?) Of course, this suggestion comes on the heels of the Cardinals' heartbreaking loss Thursday night where Albert Pujols was so ashamed of his error that he refused to even show up for the postgame press corral. WHAT A GUY!

Do you have a suggestion for next week's RIWIAW (or just want to shoot the breeze)? Let me know! riwiawrr@gmail.com