In the latest installment of the "Red Reporter Interviews" series, yesterday I spoke by phone with former Cincinnati Red and Hall Of Fame catcher Johnny Bench. Why would Johnny Bench take the time to speak with some schlepp like me, you ask? Well I'll tell you - Because I'm handsome, witty, and charming in a "aaawww, he just doesn't know any better" sort of way. And me and Pepsi MAX go way back.

Remember the Field of Dreams promotion that ran this summer where fans got to vote for a Living Legends team that would come to one lucky voter's city to take on a team of his/her friends? If you don't, we talked about it here and here. As it turns out the grand prize winner was Tim Wisecup, a chemist from Columbus, OH. Tim will be throwing out the first pitch tonight before Game 2 of the World Series and his favorite player, Johnny Bench, will be catching. Hopefully Tim will only throw one baseball so this unfortunate situation doesn't occur again: 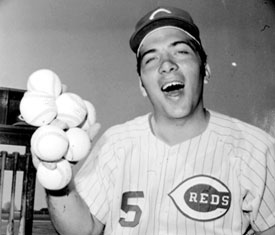 Anywho....Johnny and I chatted about Carl Lindner, The Pepsi MAX promotion he's a part of, his statue outside GABP, and Devin/Yasmani. Enjoy.

(There's no introduction portion of the interview because we basically talked over each other for about 30 seconds and it sounded like hell. My bad.)