Share All sharing options for: Jerry Hairston: An appreciation 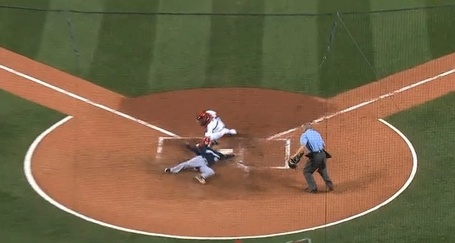 Video of "The Slide"

As easy as it is sometimes to brush aside the celebrated importance veteran experience, Hairston's masterfully evasive slide last night that nicked the very bottom point of the plate - and tied the game - was the work of a hard nosed professional who's been around the game. I've longed to break down and write a sentence like that. As long as I'm down here: He's a gritty gamer who plays the game right and his gameface is always on when it's gameday. Felt good.

I've had a weakness for journeymen utility players for as long as I've been a fan. They can't be outright  scrubs who are on the team out of some misbegotten notion of leadership or as a favor to the manager. These are players that, for at least a season, combine position flexibility, experience and watchability with a something of a late-career surge which makes the eminently root-able.  Miguel Cairo is the latest incarnation. With a squint, they begin to look like consummate ballplayers - building their career across every professional league in affiliated baseball over more than a decade and capable of thriving at any position. Disruptions in the aging curve aren't mean to last, but they remind us that the back of the baseball card isn't always fatalistic.

Like Cairo, Hairston also seems to lack the cynicism that might creep in over the years - possibly because they've learned the art of delayed gratification, saving a reserve of enthusiasm some players may spend when they peak earlier in their careers. Hairston's pull-quote from last night was telling: "I had so much fun with the Yankees team in '09 when we won it. This time, I'm really getting a chance to play, which is great. I'm really enjoying it." Thank the Reds and Chase Weems for that.

In 2008, Jerry Hairston had an out-of-nowhere .871 OPS season with the Reds. He had had some success in Baltimore early in his career, but by the time he reached Cincinnati was 32 and had just spent two seasons in Texas below the Mendoza line. His 297 PAs was just  around the right sample in which these bouts of utility brilliance seem to take place. It was a bright spot in that lost season. And after another one of those this year, it helps to not always root for the laundry.