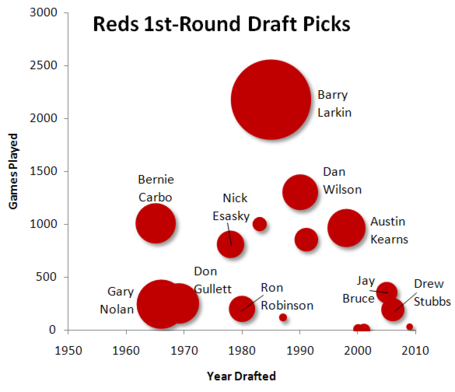 With inspiration from Chris Quick, Reds 1st-round draft pick performance according to rWAR (bigger rWAR = bigger circle...and that's total rWAR, not just with the Reds).  Barry Larkin was incredible, but aside from him the Reds' 1st-rounders haven't really been hall of fame caliber--or ever all star caliber--for most of the history of the June amateur draft.  A notable exception were the picks of Gary Nolan and Don Gullett in the '60's, both of whom played key roles in the Big Red Machine.  Bruce and Stubbs, of course, may be key to the next Reds' dynasty.

Interestingly, while historically the first round has been by far and away the best in terms of talent across MLB, the Reds have gotten some pretty impressive talent out of the second round: 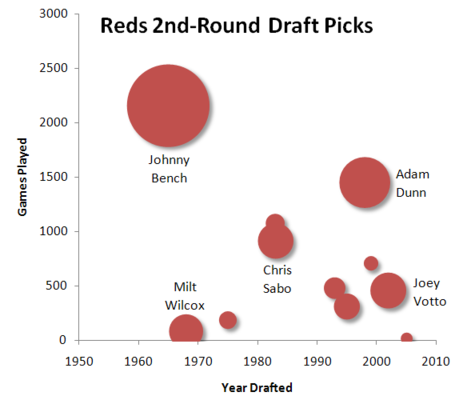 Bench and Larkin are the two best Reds draft selections of all time.  But Sabo and Dunn were fine players, and three years in, Joey Votto is already something special.

Subsequent rounds are pretty sparsely populated, so i didn't make graphs for them.  Generally speaking, there were only one or two relevant players from each round.  So here they are in list form:

3rd: Danny Tartabull '80 (21 WAR; I didn't realize that the Reds drafted him--Tarbabull was taken from the Reds by the Mariners in 1983 as part of the wacky and now-defunct free agent compensation draft!  Aaron Boone '94, 10 WAR, was also a 3rd-round selection)

You can tour through all of the Reds' past June Amateur Draft picks in Baseball Reference's wonderful database, which is where I pulled all of these data.