He cleans up good. 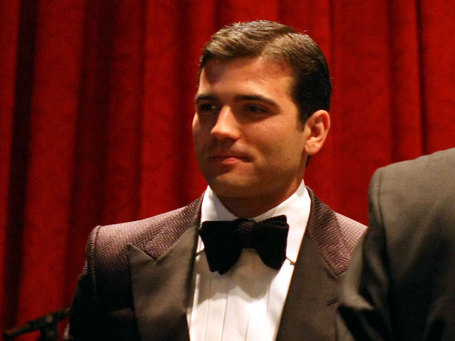 Because I was such a last-minute Louie, I ended up in the equivalent of the last row in the left field bleachers. It was so dark and I was so far away I couldn't take very good photos. Especially since I didn't want to bring my big camera and long lens. Doesn't fit an evening bag, y'know.

I was worried about being underdressed. It was a "black tie optional" event, which according to the Internets, means they want it to be black tie but don't want to exclude those whose finances don't allow them to buy or rent a tux. And they really want all the players being honored to wear tuxedos. But last year, A-Rod wore a plain old business suit. Even though he can surely afford a tux. That should have been my clue. I was fretting about whether my dress, shoes, hair, coat, etc. were formal enough, but when I got there, a lot of people were dressed really casually. Some were wearing chinos and oxfords, no tie. Some women were wearing evening gowns, but some were wearing business suits, and some looked like hookers. Josh Hamilton's wife was a real standout in a long, flared, tiered red ballgown. Not least because this being NY, nearly everyone else was wearing black.

Anyway, it was a really nice evening. Worth the expense and the hassle of dressing up on a night where temps were in single digits. Willie Mays was there, with the Giants contingent. (They brought their trophy with them.) There was a constant mob around Mays all night. He handled it by only signing autographs for kids. Which plecked off the autograph hound sitting next to me, who pointed out that the kids don't even know who Willie Mays is. (I think the only autograph he scored was Votto's.)

Barry Larkin gave a very nice introduction for Joey, going down the very long list of his awards and accomplishments last season. Joey gave a short but heartfelt speech. He ended it by talking about how his dad died two years ago, with a brief tribute and how he wished his father could have been there. His voice broke at the end; you could tell he was near tears. Most of the people in the room didn't seem to know much about Votto at all, but he made a very good impression.

The Reds had a table upfront. Walt Jocketty was there, along with some other Reds staffers. Also at the Reds table were Joey's mom, brothers, and girlfriend. (Joey's brothers are named Paul and Ryan. Named after Janish? ;-)

There was a program of sorts available. It had illustrations, photos, and articles...and a lot of ads. Kind of like the ads parents take out for their kids in yearbooks. Some of them celebrate award winners, some of them are farewells to people who have retired or passed on. The poor Pirates had one celebrating Bert Blyleven's Hall of Fame selection. He's not exactly known as a Pirate, but what else do the Bucs have to celebrate these days?

The Reds took out an ad for Joey, and went in on one with the Mariners for Junior. I'll post scans down in the comments, to avoid the wrath of SB Nation's photo policy. 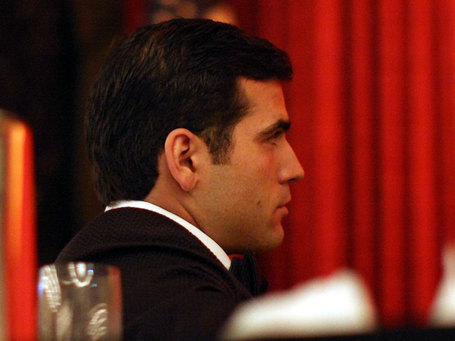 Color's kind of strange, because they had this disco ball thing going. I checked the camera menu, but "disco ball" wasn't one of the white balance options. :-P 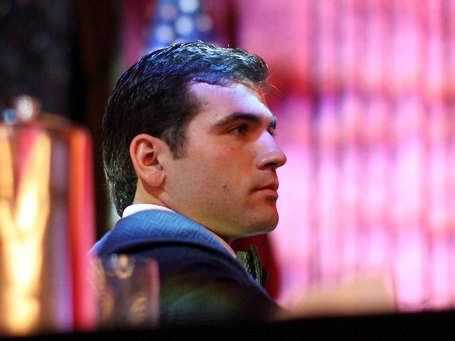 Bernie Williams played the national anthem on his electric guitar to start the evening. He and his band played "Take Me Out to the Ballgame" and "Centerfield" during the intermission, and "Glory Days" at the end of the program. 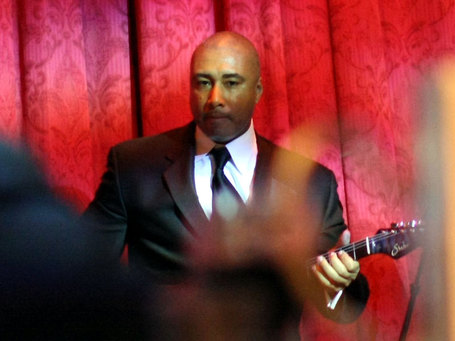 That was when I went up front and took some pics of Jo-eh. 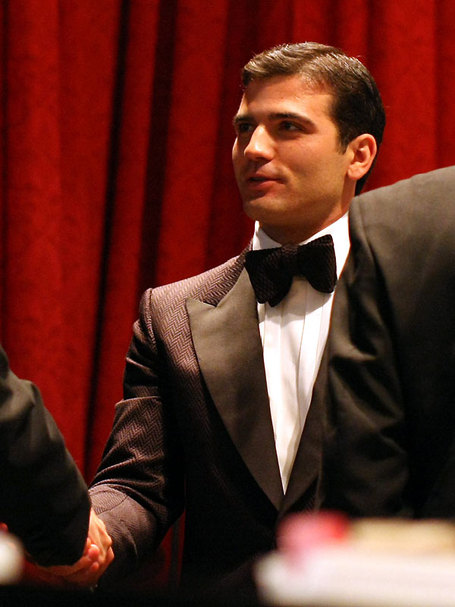 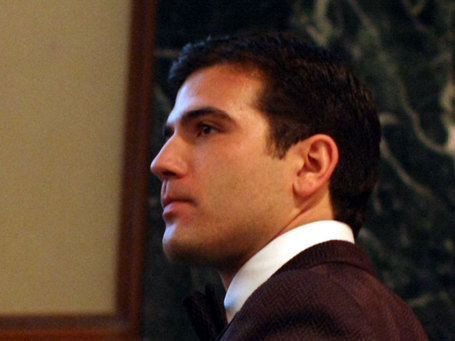 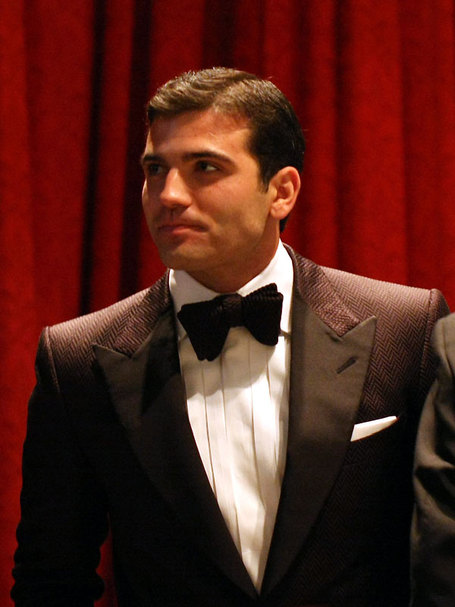 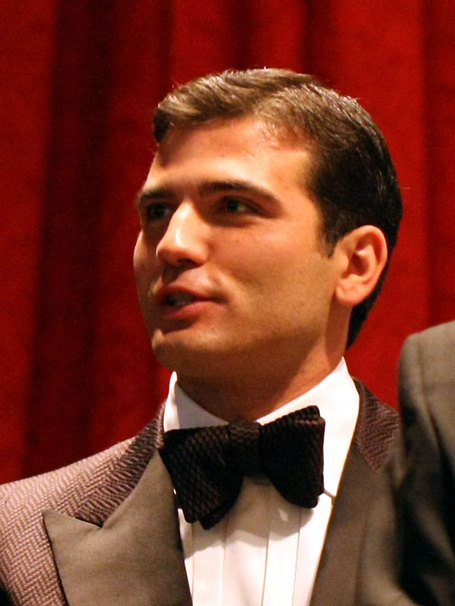 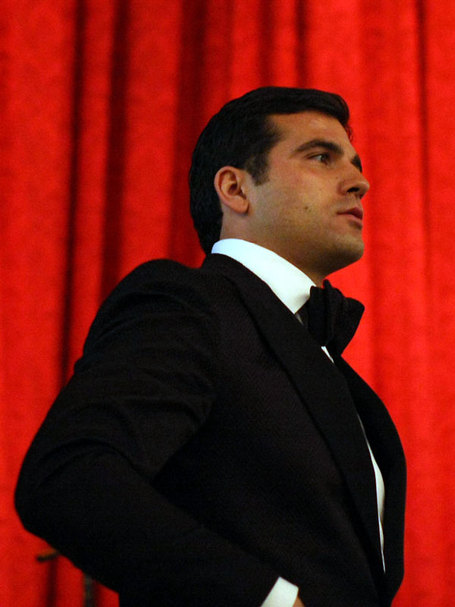 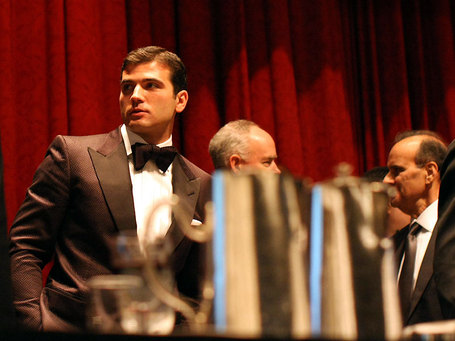 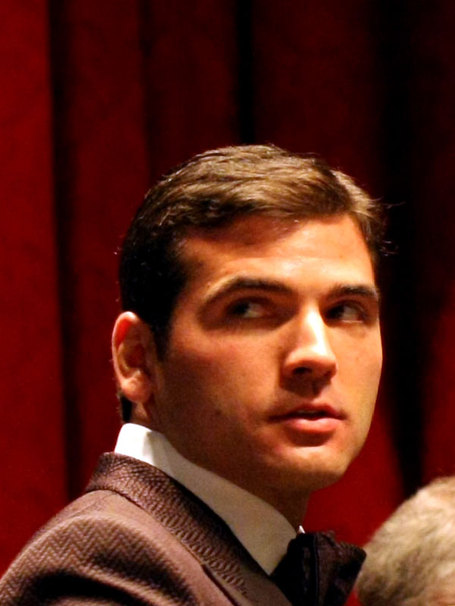 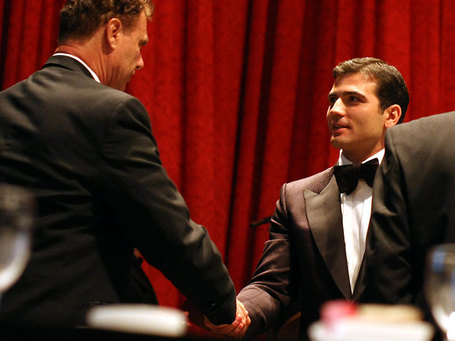 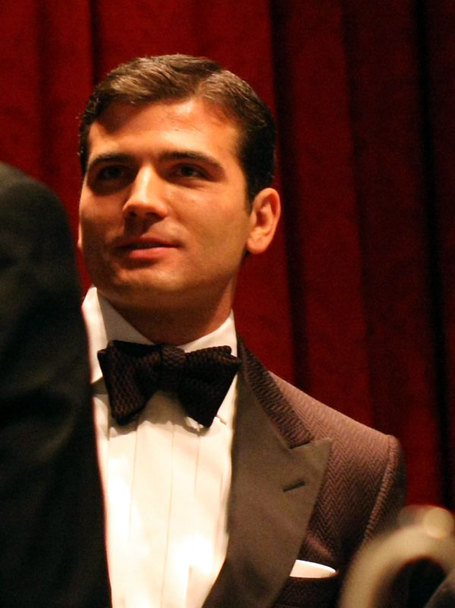 Sure was nice to spend an evening talking baseball...even though it's below zero outside.