Graph of the Day: Homegrown Innings

Share All sharing options for: Graph of the Day: Homegrown Innings 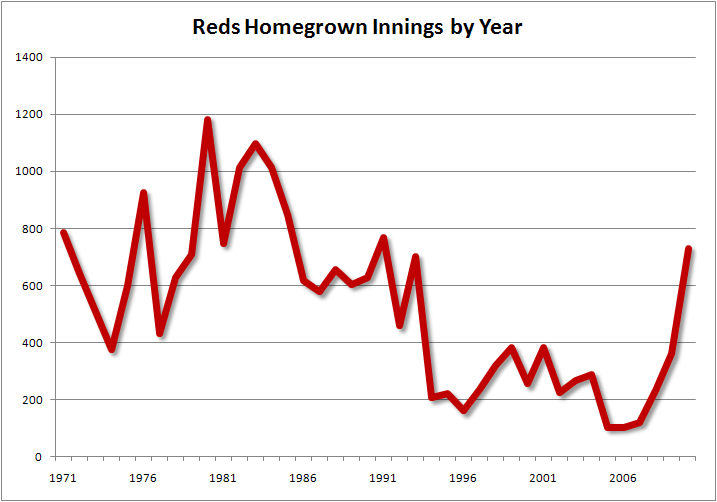 This may or may not be a regular feature. You'll have to tune in Monday to find out.

This article that Scrabbles linked to the other day got me thinking about homegrown pitching talent. Today's graph shows the number of innings accumulated by pitchers that were originally drafted (and signed) or signed as an amateur free agent by the Reds for the last 40 seasons. As you can see, there was a day when the Reds depended greatly on their farm system to develop pitching. The peak season in 1980 featured seven homegrown pitchers who threw at least 100 innings that year, including Mario Soto, Frank Pastore, Charlie Leibrandt, Mike LaCoss, Paul Moskau, Tom Hume, and Joe Price. From 1980-1984, the team averaged over 1000 innings a year from homegrown pitchers. Then again, those teams mostly sucked, so maybe that's not the best strategy.

Last season, the Reds got 728.2 IP from homegrown pitchers. It was the most since Tom Browning, Jack Armstrong, and Scott Scudder were toeing the rubber for the Reds in 1991 (another team that sucked). With as many as eight homegrown pitchers possibly on the staff on Opening Day, the team could easily push the 1000 inning mark this season. Hopefully the talent on this team proves more reliable than what we saw in the early 80s.