Share All sharing options for: Reds lay down some great Wood, beat Cards 6-1.

Travis Wood.  I mean, come ON!  The guy pitched seven innings while giving up only five hits and walking two.  The only run that scored in that time came around due to his own throwing error.  But he even made up for that by homering off of Adam Wainwright in his second AB.  Honorable mentions go to Jonny Gomes, who went 2 for 4 with a double and two RBI, and Aaron Miles and Matt Holliday, who had some key defensive miscues to help the Reds to some of those runs. 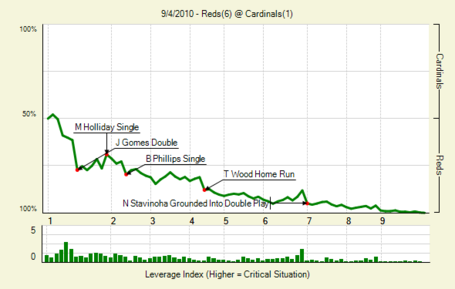