Red Reposter EXPOSE: Are the Cincinnati Reds upsetting the natural order by playing TOO well?

Share All sharing options for: Red Reposter EXPOSE: Are the Cincinnati Reds upsetting the natural order by playing TOO well?

Chapman gets his first win
Felicitaciones, Aroldis! But now we have to figure out how to say "wins are a weak indicator of individual player value" in Spanish. It was another corker of a performance. Seeing Chapman two nights in a row has Reds fans giddy and only vaguely apprehensive. On using the Cubandolero again, Dusty sez, "We didn’t have much of a choice. I figured we’d take our shot right then and hopefully score." There's no indication the Reds are treating Chapman with anything but kid - or at the very least adolescent - gloves, as they did with Mike Leake (who is arguably much less of an injury risk). If his mechanics and training prep are sound, and he's limited to 10-15 pitch outings, we can all rest fairly easy and bask in the heat. Still, with Rhodes ailing and Bray rocky, it might be worth getting another lefty in the pen. Danny Ray Herrera has been much maligned lately, but there's a clear need right now for a LOOGy for medium leverage situations, helping to preserve Rhodes and Chappy. 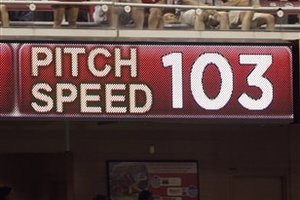 Chapman hits 103 mph
If you don't believe me, look up at that fake-looking number. Or read this real quote from the Columbus Dispatch, which is a newspaper serving Ohio's state capital:

Jay Bruce has a pain near his ribs that will "side"-line him for at least a few days
This is unhappy, vaguely Biblical news. If it's an oblique, it's nothing with which to mess around. Did Jim Edmonds supposed hitting pointers cause Bruce to develop an Edmonds-style ailment? There's no reason not to engage in wild paranoiac speculation.

The master has become... the master
Yonder Alonso, prostrated prospect, has come to study the ways of Vottotola Joe-meini. No one is pretending Yonder isn't permanently blocked at first, but he brings to the expanded roster his well-honed hitting approach and plate vision. I could even see him spelling Votto a few times down the stretch. I just hope this apprenticeship doesn't take a turn toward creepy stalkerism:  "Joey's the best player there is here, and I think he's the best player in the league," Alonso said. "Whatever he needs me to do, I'll be here for him. I'm just going to learn as much as possible from him. I'll be his shadow."  On the real though, Alonso seems like a stand-up guy - I'm still holding out the irrational hope that the Reds will find a way to keep him.

Edmonds wants to come back somehow
"It’s getting there," he said. "It’s a serious issue. The swelling and the bleeding have gone down. But I’ve never had a pulled muscle. I didn’t know if it would be a week, two weeks on six weeks. I’m flying by the seat of my pants." I didn't realize there was bleeding involved. Edmonds has his share of detractors here, but I see no reason to cut him down. He's in pain, but would like to avoid a ragged ending to a brilliant career. However, this timetable is not helpful. If we're only looking at a few weeks of a Jim Edmonds who hasn't fully recovered, it seems worth it to give his roster spot to the likes of Wladimir Balentien or Daniel Dorn, rather than have to DFA someone to get another outfielder up.

What should Chapman's nickname be?
"MidWest Sports Fans" reminds us that the Cuban Missile is already taken by Alexei Ramirez. The Reposter has already posited its suggestions. I didn't like any of the alternatives listed here, but if we're intent on coming up with a moniker that's Cuba-centric, why are we trying to wedge in there the least appealing aspects of our shared history with the island? Bandoleros are cool as hell.

Details on the ticket lottery for Reds playoff games
I'm prepared to say this is no longer aspirational.

OMG! Reds with a Warhol-esque video of Chapman getting a haircut