A recap somewhat in the telegraphic schizophrenic manner of tales of the planet Tralfamadore: Astros win, 5-3.

Share All sharing options for: A recap somewhat in the telegraphic schizophrenic manner of tales of the planet Tralfamadore: Astros win, 5-3.

On a night when it felt like nobody really wanted to win the game, I don't think anybody wanted to be JNMHSotG either.  I'll have to give it to Angel Sanchez, who took advantage of a bases loaded, no out situation against Aroldis Chapman.  He singled to score two runs and give Chapman his first loss in the majors.  So it goes.

Honorable mentions go to Jonny Gomes, who hit a three run HR off of Wandy Rodriguez, and Joey Votto, who had a solid offensive performance.  In 5 PAs he had a walk, a single, and a double.  Oh, and Drew Stubbs, who went 1 for 2 with two walks (!).  And I guess I should mention Hunter Pence, too, who put his Tralfamadorian abilities to good use in the outfield. 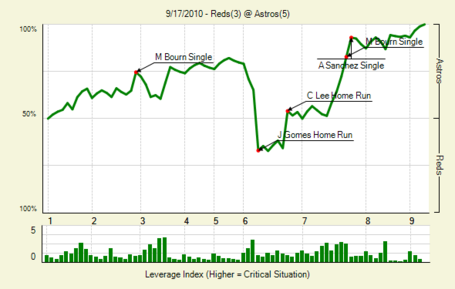