Share All sharing options for: Jay Bruce Is All Outta Bubblegum. Reds win, 7-5.

Orlando Cabrera.  The Old Man and the SSea has been hot with the bat lately, and hit three doubles today.  He scored after each one.  Sure, his range ain't great, but he's still contributing to the team's winning ways.  Honorable mentions go to Jonny Gomes, Drew Stubbs, Jay Bruce (for a highlight reel catch), and Kelly Johnson. 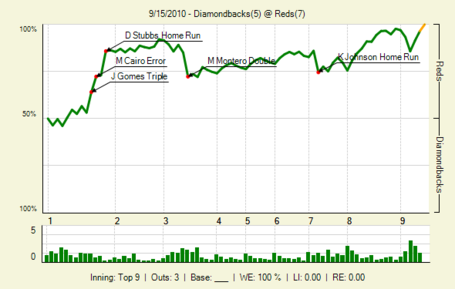