Share All sharing options for: Now if I seem to be afraid to live the life that I have made in song, well it's just that I've been losing... so long. Reds win, 7-2.

Jay Bruce.  Bruce wasn't originally in the lineup, but asked Dusty to be included.  Thankfully, the skipper listened to him and Bruce made his return to the team in the same way he left it - scorching hot.  Bruce went 3-4 with two runs, 4 RBI, and home runs in his first two at bats.  With production like that, it sure does seem to put the hand-wringing over our offense firmly in the rearview, doesn't it?  Honorable mentions go to Joey Votto, Drew Stubbs, Ryan Church, and Bill Bray. 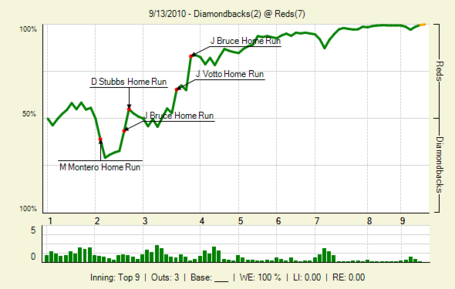