Reds win the battle of starters; relief, not so much. Final: Pirates 3, Reds 1.

Share All sharing options for: Reds win the battle of starters; relief, not so much. Final: Pirates 3, Reds 1.

I guess this has to go to Andrew McCutchen, who batted with the bases loaded and two outs in the top of the ninth...and hit an absolutely horrible 1-2 pitch from Francisco Cordero for a double to clear the bases and put the Pirates up 3-1.

If not for the craptastic ninth inning this would have gone to Johnny Cueto, who pitched a great game: seven shutout innings.  He only allowed three hits and two walks.

Gray's Slightly Sarcastic Star of the Game Award goes to Francisco Cordero, who blew the game in the ninth by walking one and allowing three hits. 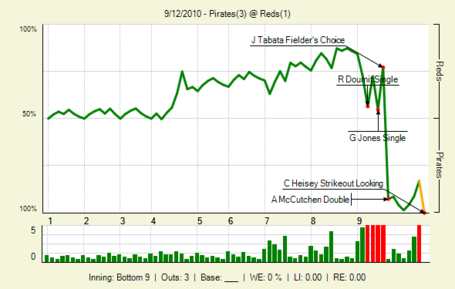