Reds keep on keepin' on, win 6-1 to sweep their eighth series of the year.

Share All sharing options for: Reds keep on keepin' on, win 6-1 to sweep their eighth series of the year.

Ryan Hanigan.  He didn't start, but pinch hit in the seventh with the score tied, one out and two on.  He promptly hit a home run.

A very special honorable mention goes to Ken Macha, who took Chris Narveson out of the game after he started the seventh by striking out Jonny Gomes and walking Ramon Hernandez.  Todd Coffey came in and gave up four runs.  Then Mike McClendon and Zach Braddock came in to give up two more.

Okay, and another honorable mention to Aroldis Chapman, who pitched a perfect seventh inning, striking out two while hitting 104 on the Fox Sports Ohio radar gun twice.  It may have meant little, but it really felt like the energy level of the game changed completely with his appearance.  And I should also mention Johnny Cueto, who threw six innings of one-run ball, giving up only five hits and a walk in that time. 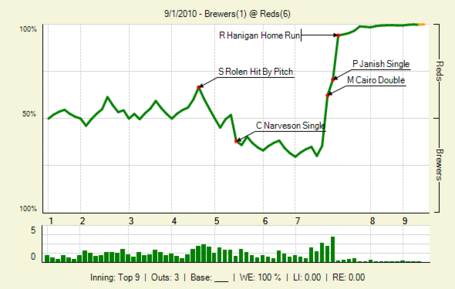