Share All sharing options for: Wood you believe a win? Reds 11, Cubs 4.

Joey Votto: he went 2 for 5 with a double and a HR.  Honorable mentions go to Jay Bruce, who went 3 for 4 with a double and a walk, and Jonny Gomes, who finished 1 for 1 with four walks, scoring four runs in the process.  But nobody had a bad game offensively, with all of the starting position players getting at least one hit.  Oh, and Travis Wood pitched beautifully until the seventh inning (after not giving up a hit until the sixth). 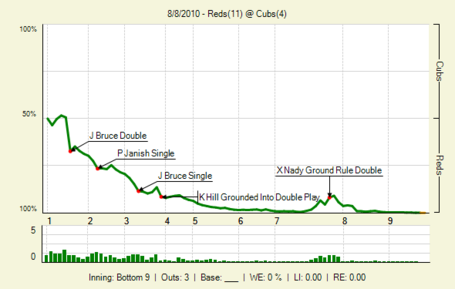