Kosuke Fukudome, who went 2 for 3 with a HR.  The only other players to reach base more than once were Jay Bruce (1 for 3 with a walk) and Ryan Hanigan (2 for 4).  Xavier Nady and Joey Votto did manage home runs though, with Votto racking up his 32nd of the season on the same night that Adam Dunn hit number 32.  But still, the Reds once again made Randy Wells look like a pretty decent pitcher; he scattered six hits over six innings while walking two and allowing only two runs. 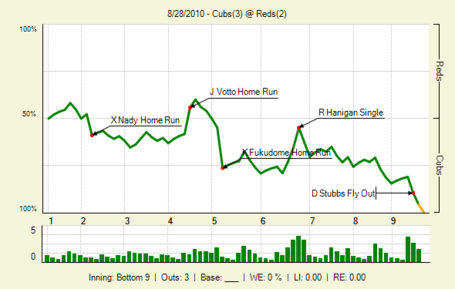