Share All sharing options for: His name is Jay. To see him play will make you say, "God damn, that RF made my day!" Reds win, 7-1.

Jay Bruce.  He's Mr. Opportunity, and he's knockin'.  Balls out of the yard, that is.  Bruce went 3-3 with three runs scored, five RBI, and a walk.  Oh yes, and all three hits were home runs.  Matt Christopher is already furiously at work on a sequel - "The Boy Who Only Hit Homers And Worked 9 Pitch Leadoff Walks."  Honorable Mentions go to Johnny Cueto for 8 innings of 1 run ball (plus 8 Ks and 0 BBs), Chris Valaika for hitting his first career home run and double, and Drew Stubbs, who joined Bruce in the Multiple Multi-Base Hit Club with two doubles. 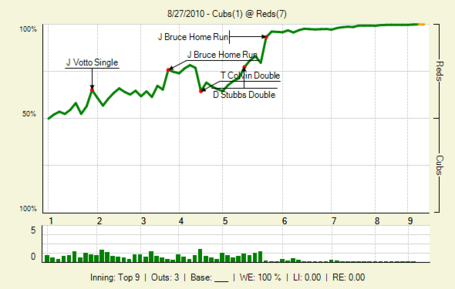