Opting for the path of most resistance, Reds win 12-11.

Share All sharing options for: Opting for the path of most resistance, Reds win 12-11.

Joey Votto.  Jo-eh showed why he is an MVP by going 4-7 with two home runs, four RBI, and two runs scored, and drove in the winning run to boot.  The man comes up big repeatedly in the biggest situations.  Several players have done well this season, but make no mistake.  It's because of Votto that we're leading the division.  Honorable mentions go to Francisco Cordero, Nick Masset, Pablo Sandoval, Juan Uribe, and Jonny Gomes.  Ok, and after reading the game thread, Paul Janish, too.  That WPA is impressive. 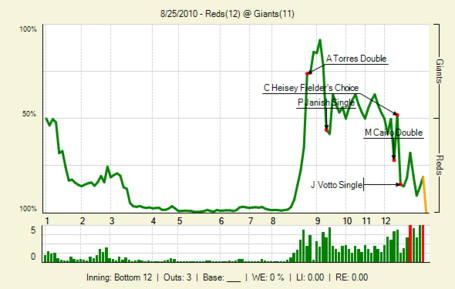