It's a strange time to be a fan of sports or celebrities. Just a few years ago, our only connection to the athletes we followed were via ESPN or the local journalists, and often the message was filtered through those media to present the story they wanted to tell.

Today is different. Today, athletes connect with fans in a variety of ways, one of the most popular being through Twitter. While there are dozens and dozens of athletes from a variety of sports participating on Twitter, the only player on the current Reds roster on Twitter at this point is pitcher Mike Leake (@MikeLeake44).

"The Reds have such great fans," Leake said, "and I thought it would be fun to have an outlet that they can hear directly from me.  I had heard about Twitter but didn’t know a whole lot.  Now that I’ve gotten started, I love hearing from the fans.  I also thought it would be a great way to get more interest in the Reds."

And the Reds have been nothing but supportive of Leake's efforts. "The Reds have been great," he says. "I think I’m the only Reds player on Twitter, so they’re pretty excited.  They have their own profile (@CincinnatiReds) but it’s different when it’s a player on there.  It brings the fans closer to the game." 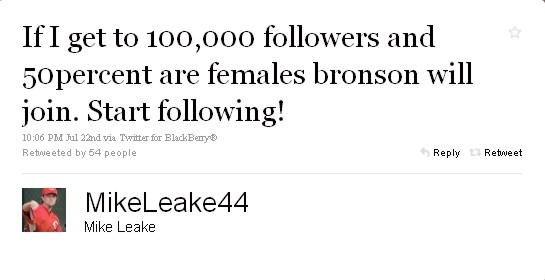 I asked Leake if he had been trying to get other guys on the team to join Twitter. He responded: "I haven’t really been trying to get more guys, but they know I’m doing it. It would be great to get Votto and Gomes on there. People would love that."

I whole-heartedly agree with that assessment! Start prodding them, Mike!

This isn't just a passing fad for Leake either. "I think it’s a necessity," he said, talking about players who want to market themselves. "You see a lot of celebrities using it. And athletes like Chad OchoCinco has over a million followers.  And he’s got a reality TV show.  But I think the main benefit is still being able to speak directly to the fans."

The big thing that Leake has done to connect to his fans is to have a couple of contests for his followers. The first contest invited people to eat at local First Watch restaurants and get 10% off their bill by ordering Leake's favorite "Lean Machine" breakfast and mentioning him. One lucky follower won 4 tickets to the Reds-Marlins game on August 13.

The winner for that contest was Kylie Becker, a sophomore at Eastern Kentucky University who grew up a Reds fan, but has become even more committed to the team now that they are young and winning. "Our team is so much different in a way that we have younger guys, especially pitchers, doing such a phenomenal job that the veterans get a little bit of a break," she says.

Becker was excited to get a chance to interact with Leake on Twitter, especially because he instantly became one of her favorite players the day he first put on his Reds uniform. "The thing that got me at first about him was his age," she said. "Being one of the youngest players in MLB at 22 and a starting rookie for the Cincinnati Reds, that just sounds unreal to me.  And what's exciting is that this is just the beginning of Leake's career."

It's also just the beginning of Leake's time on Twitter. His latest contest runs through Friday and will get you 10% off of your bill at Montgomery Inn Boathouse. Doing so will also get you entered to win 4 tickets to Tuesday's game against the Milwaukee.

If you are on Twitter, be sure to follow Leake. As he says, he loves hearing from fans. Also, we need to get him up over 100k so that we can learn from the wisdom of Bronson Arroyo too!

NOTE: While Leake may be the only player on the 25-man roster on Twitter, you can also follow minor leaguers Matt Maloney (@mo22maloney), Sam LeCure (@mrLeCure), and Matt Klinker (@mattklinker). Oh yeah, and you can also follow Red Reporter (@RedReporter).