Not really backing up that talk: Reds lose 8-4.

Share All sharing options for: Not really backing up that talk: Reds lose 8-4.

Matt Holliday.  He went 3 for 4 with a double, and two of those hits knocked in important runs.  An honorable mention goes to Drew Stubbs, who was 1 for 3 with a timely hit, a walk, and 2 RBI.  Yadier Molina (2 for 3 with a HR and a sac fly) would also warrant an honorable mention if he hadn't started things with BP in the bottom of the first. 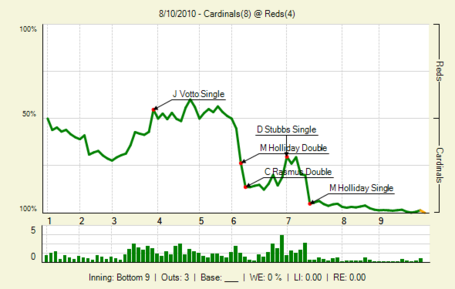