I was listening to Chad's interview of Mark Sheldon yesterday, and they brought up the excellence of our catchers as a key (one of many!) part of the Reds success this year.  After Ramon Hernandez hit another homer last night, I thought I'd pull up the data to showcase them a bit.

First, some baseline info: prior to the season, based on CHONE and ZiPS, I came up with this projection for our catchers:

And here's what they've actually done (prior to last night's game):

Clearly both of our frontline catchers have hit far better than projected so far this year.  That's been hampered a bit by increased PT by the 3rd catcher in the depth chart, but even so, this has been awesome production from our backstops so far.

Here's how they rate against the other teams.  I'm reporting wins above average here, adjusted for park, including both offense and fielding.  Update: I'm not including a position adjustment, so the "average" catching team gets a negative number.  This was done for simplicity, but might have caused more confusing than I expected. 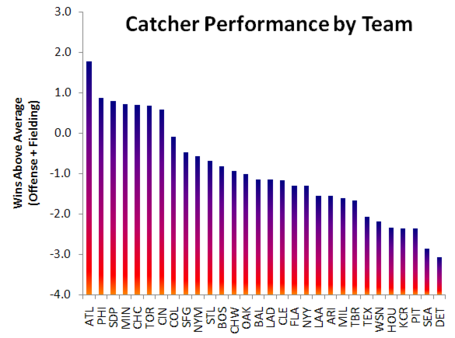 So there's Brian McCann at the top (he also homered last night).  But the Reds catchers have clearly been in the second-tier of MLB catchers, along with the likes of Joe Mauer's Twins and Geovanny Soto's Cubs.    I was surprised to see the Padres' catchers there, but they've been excellent behind the plate and their park deflates their offense.  Similarly, Miguel Olivo's performance in Colorado is inflated by park, and we're adjusting for that.  I also had no idea that Carlos Ruiz is having the kind of season he is having, so that was another surprise.

How important is production from catcher to a team's success?  The Yankees, Rays, and Rangers have had below-average catching, but all other teams at or near the tops of their divisions have had at least average catching thus far.  So, maybe it's not essential, but it's pretty helpful.  You can see a table with all of the datums behind that graph below the jump.

wOBA, RAA, and WAA are all park-adjusted. OBP & SLG are not. Fielding is the catcher fielding stat used in my power rankings, and is based on SB/CS/WP/PB/E rates.  Catcher offense splits are from baseball-reference.
* Has played significant time at position other than catcher.