Was Tommy pitching or playing shortstop for the Braves? Reds win, 2-1.

Share All sharing options for: Was Tommy pitching or playing shortstop for the Braves? Reds win, 2-1.

Nobody really had an outstanding individual game today, but Brandon Phillips did have an RBI triple to tie up the game, then scored on an Alex Gonzalez error.  He also had a very nifty defensive play.  Honorable mention goes to the Reds bullpen: Jordan Smith, Bill Bray, Nick Masset, and Francisco Cordero combined to give up only one hit and two walks in four scoreless innings.

But the Reds wouldn't have won without two key defensive miscues by Jason Heyward and Alex Gonzalez (though the latter did also score the Braves' only run).  Without those plays, they may have never chased Tommy Hanson from the game.  As it was, he pitched seven and a third innings, allowing five hits, one walk, and one earned run. 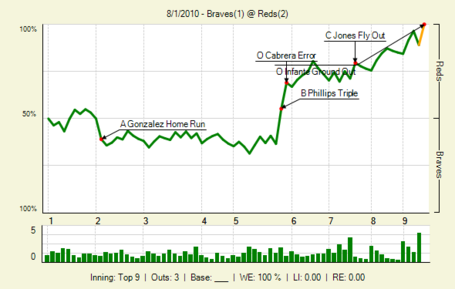