Graph of the Day: Vote Votto!

Share All sharing options for: Graph of the Day: Vote Votto!

I'm preaching to the choir on this one, but just in case someone comes to this site and isn't sure they should vote for Joey Votto for the All-Star Game, here's a little more evidence. I've heard some uneducated arguments against Votto saying that the All-Star Game isn't just about having one good half of a season. As you all know, Votto has had much more than one good half of baseball. In fact, over the last 3 seasons, he's been one of the 5 best first basemen in all of baseball: 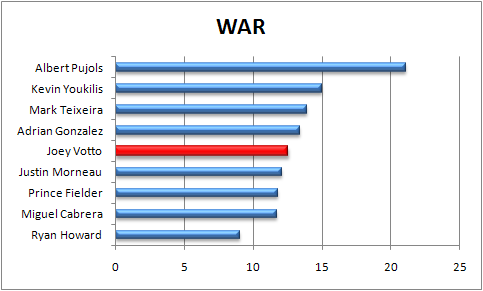 Votto has benefited from playing in a good hitter's park, but even when you adjust for the park, his offensive numbers still stand in front of a couple of the top 1B, most notably Ryan Howard: 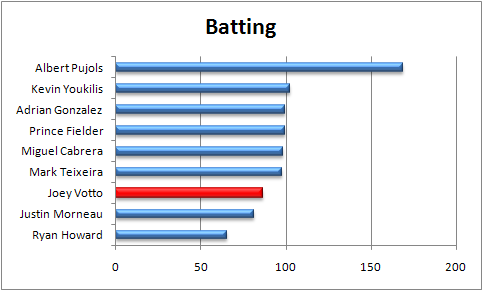 These numbers are the batting runs tracked on FanGraphs' Value page. If this doesn't put into perspective how great Albert Pujols is, then I don't know what to say. There are a lot of great hitting 1B, and over the last 3 years, he's been at least 50% better offensively than any of those other 1B. Wow.

Where Votto looks really good is defensively - surprisingly enough. I wouldn't start or end a fight with these numbers, but I figured I'd post this just to make the picture a little more complete. For what it's worth, these numbers are UZR and Votto doesn't look as good using other defensive metrics: 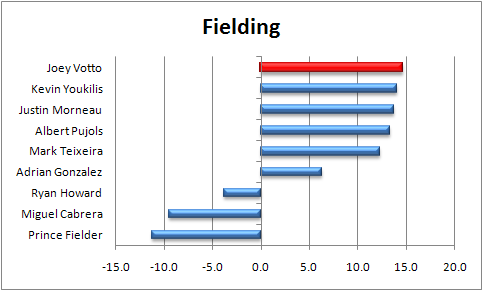 Clearly Joey Votto is deserving of being an All-Star, even if you think that All-Stars need more than one good year on their resume. Make sure you get out and vote Votto.