Joey Votto.  The All-Star (vote here!) went 3-4 with a walk, a double, and two home runs.  There's no doubt in my mind that he would have reached base yesterday if he hadn't been ejected in the first inning, and today would have put his streak at 43 games.  Alas.  Honorable mentions go to Travis Wood and Jerry Meals, the home plate umpire.  He conferred with his fellow umpires and reversed a strikeout call on Scott Rolen and instead awarding him first base for being hit by a pitch, which opened the gates to the breakout fifth inning. 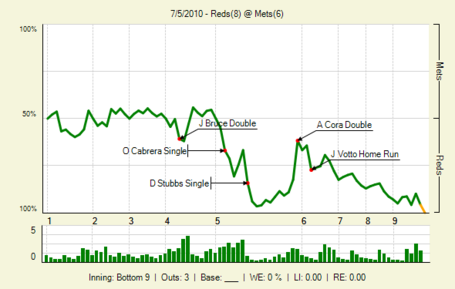