As the Offense Slows, Defense is Picking Up

Share All sharing options for: As the Offense Slows, Defense is Picking Up

I've talked a lot recently in the game thread intros about the excellent starting pitching the Reds have been receiving of late. It continued last night as Johnny Cueto gave the Reds their 8th quality start in their last 9 games. The one game that wasn't a QS was Mike Leake's outing versus the Phillies where his quality start turned into a disaster in the 9th.

It isn't just the starters though. The entire pitching staff has an ERA of 2.70 over the team's last 28 games. Over that stretch the Reds have allowed 5 or more runs just 5 times and they've seen their seasonal ERA drop from 4.66 down to 4.07, still only 7th best in the NL, but moving in the right direction.

The funny thing about all of this improved pitching is that the pitching hasn't really improved all that much. What I mean is, if you look just at the things over which the pitchers have the most control (K, BB, HR), there hasn't been much of an improvement of late - in fact, they've gotten worse in spots: 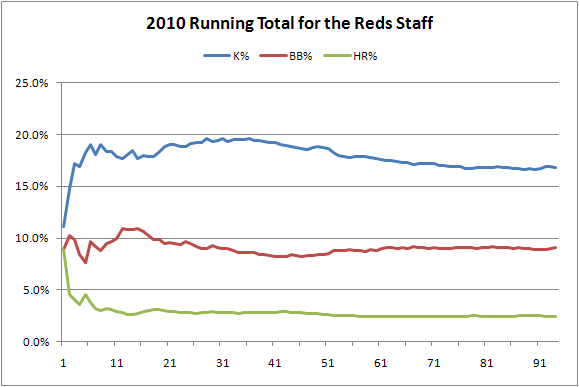 Walks and home runs have been fairly steady for the last 40 or so games, but as you can see, strikeouts have been on a decline for the last 60 games. This pattern probably won't hold forever now that Edinson Volquez is back in the rotation, but these three indicators do not point to any dramatic pitching improvements of late.

Typically, when a pitcher's runs per game is higher than his FIP (Fielding Independent Pitching - an ERA-like measure than only takes K, BB, and HR into account), it is due to a lack of help from the pitcher's defense behind him. Now some of that difference could be caused by the pitcher getting hit hard, but research shows that a large portion of it is out of the pitcher's control. As we've seen above, the Reds pitching staff has been reasonably steady over the last couple of months, but the R/G continues to decline: 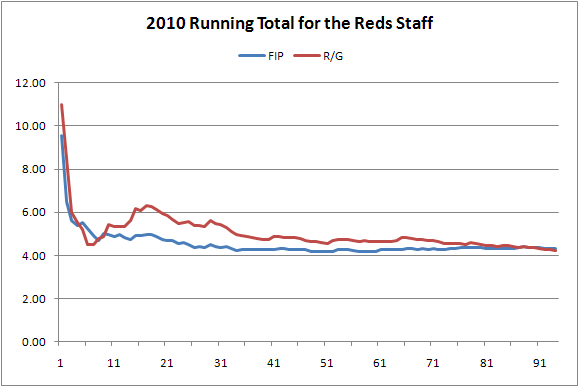 So if the pitching is the same, but they are allowing fewer runs, it must mean the defense is improving, right? As a matter of fact, yes it is: 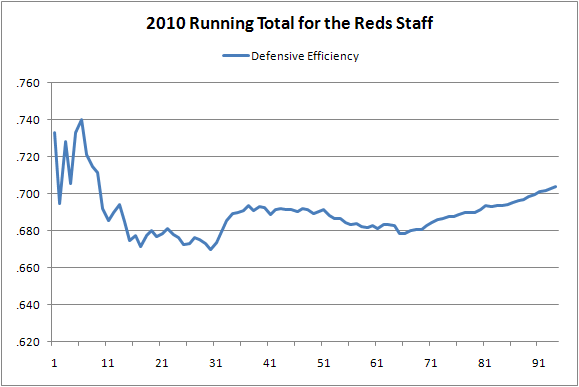 The above graph is defensive efficiency, or the percentage of balls in play that are turned into outs. As you can see, over the last 28 games or so, the defense has been on a steep incline. In fact, since the Reds ERA reached 4.66 back on June 16th, the Reds defense has turned 77% of the balls put into play into outs. That's a ridiculously good rate. They won't maintain such a great level for the rest of the season, but if they can level off at their current seasonal mark, they'll match their rate from last season, which was good for 3rd in the NL.

Unfortunately, we can't break DER down into the individual players to see who has stepped up their game over the last couple of weeks, and most defensive metrics look silly over such a small sample for individuals anyway, but we can say that Jonny Gomes is the only player on the Reds who rates negatively in most of the defensive metrics. There's some guys out there that can really pick it.

For a team that was supposed to be built on pitching and defense, it's been fun to see both starting to come through over the last few weeks. Hopefully the offense will hold up their end of the bargain too so we don't have to see anymore of those 1-0 losses.