Share All sharing options for: Reds Hit a Home Run with Hall of Fame Induction Gala

Last night, the Reds held their Hall of Fame Induction Gala to honor new Reds Hall of Fame members Chris Sabo, Pedro Borbon, and Tony Mullane. It was a star-studded affair that honestly left me feeling a range of emotions as a Reds fan. 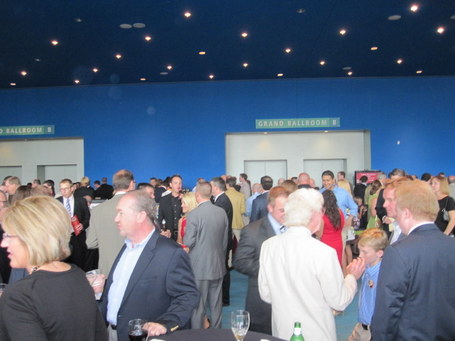 The evening started off with cocktails and some silent auctioning to benefit the Reds Hall of Fame and Museum. There was quite an impressive spread of memorabilia, as you would expect at such an event. As you would also expect, I did not spend a dime, lest my wife invite me to not come back home ever again.

There was quite a large crowd in attendance, over 1200 in attendance according to the Reds. And while the majority appeared to be the typical charity event types, there were many in attendance who were clearly passionate Reds fans who do whatever it takes to make it to events like these. It was a good mix of people, which gave the event some buzz and energy.

I was attending the event as a media-type, but I'll be honest, I'll never succeed as a media-type as long as I continue to be a fan. I was as gaga over the event as anyone. It's hard to not be in awe when so many of the players that you idolized as a kid are in the same place at one time: 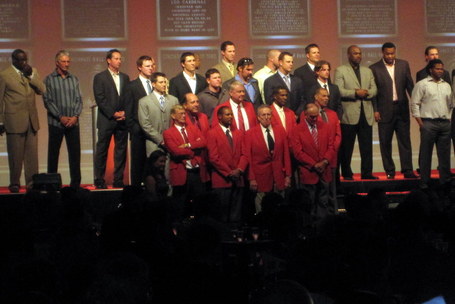 The evening kicked off with some player intros, first the current team, then the collection of Reds Hall of Famers who were able to make it. Players walked in via a catwalk and waved to fans and then stood on the stage, as you see in the picture. It very much had the feel of a Hollywood event, which was probably due to the involvement of Philip Myers, who organizes corporate entertainment events and has been the man behind many of the Reds recent successes like Redsfest and the Civil Rights Game events. It may sound cheesy to read about a corporate entertainer running the show, but believe me, it works. The whole night ran smoothly and the energy of the event was balanced perfectly - things were up when they needed to be up, and when the mood was brought down, it worked just right.

After a break to eat, the real festivities started. First, the Reds gave the Powell Crosley Jr. Award to Louise Nippert, the wife of former Reds owner Louis Nippert. The award acknowledged the special role that the Nipperts played in the building of the Big Red Machine as well as their generosity to the Cincinnati community.

The next portion of the evening was a recap of various points of Reds history, hosted by the bevy of Reds announcers including Marty Brennaman, Thom Brennaman, and Jim Day & Jeff Piecoro. The highlight for me - mainly because it was the only real awkward moment the whole night - was when Thom introduced an actual light from Crosley Field that had been used during the very first night game 75 years ago. The light acknowledged the crowd, but had nothing to say.

The Reds also honored the 1940 team on their 70th anniversary, as well as the 1975 team on their 35th anniversary. For the 1975 honors, Reds Hall of Famers Johnny Bench, Jack Billingham, George Foster, Cesar Geronimo, and Gary Nolan took the stage to answer a few questions: 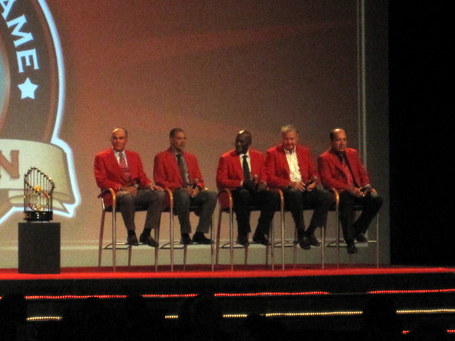 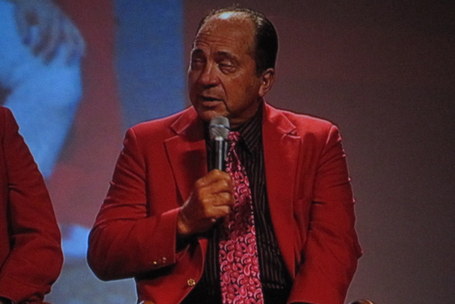 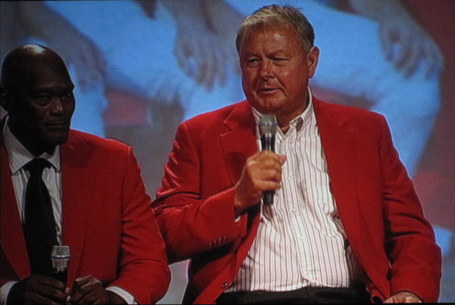 The most memorable moment of the 1975 discussion, and perhaps the entire evening, was some pre-recorded words from Sparky Anderson to his former players. Anderson, who has not been in the best health of late, which unfortunately shows in his speech, was still very eloquent in his Sparky Anderson way. He had much love for his former players and his words put a lump in my throat. I wish I had taken notes or recorded the video, but believe me when I say that it was powerful. 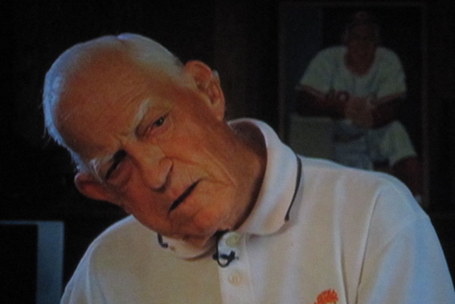 The discussion with the 1975 team was followed by a celebration of the 25th anniversary of Pete Rose breaking Ty Cobb's hit record. Rose was not in attendance for the event - there was no indication as to why, though I'm guessing the Reds are still shy about doing anything official with him because of the ban - but Reds fans seem to love anything they can get about Pete. To be honest, I'm over him.

The last historical discussion before they got to the actual player induction speeches was a celebration of the 20th anniversary of the 1990 Wire-to-Wire Champions. The picture at the top of this post is the collection of players who were in town from this team, though for some reason Billy Hatcher was not on stage. The surprise of the night, even to the players involved, was a reunion of the three Nasty Boys - Randy Myers, Norm Charlton, and Rob Dibble - for the first time since they separated after the 1991 season. As luck would have it, Dibble was coming to town to cover the upcoming Reds-Nationals series and was brought in just minutes before the team took the stage. The Cincinnati Reds twitter feed had an excellent picture of the three of them backstage. Be sure to check it out if only to see the ridiculous jacket that Myers was wearing.

Marty Brennaman interviewed some of the players from the team on stage, including Barry Larkin: 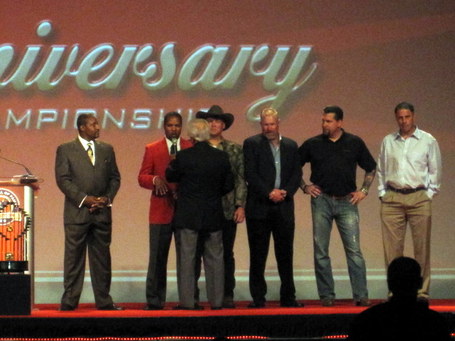 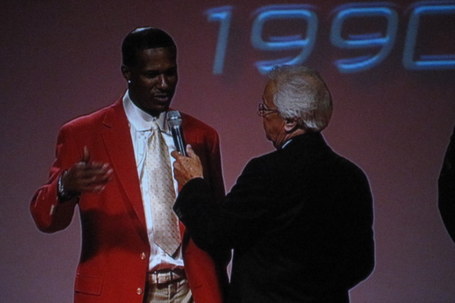 Davis admitted that his home run in Game 1 of the World Series keeps getting bigger and bigger every time he comes back to town, which seemed odd to him, but he accepts it. The best line of the night for me was from Glenn Braggs, who told the story of when he was traded to the Reds and Eric Davis introduced himself and said, "Welcome to the big leagues!" (Braggs was coming from the Milwaukee Brewers, who weren't having such a great year at the time). 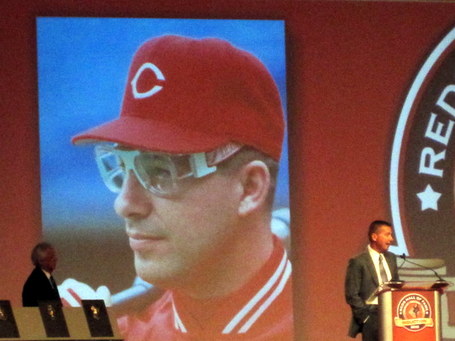 Finally, the event closed with speeches from a relative of Tony Mullane, Pedro Borbon and his daughter, and Chris Sabo. The most memorable parts were Borbon declaring that he has never put any sort of curse on the Reds organization and that the 2010 team is going to win it all, and Chris Sabo thanking Pete Rose (and indirectly Buddy Bell, who got hurt) for taking a chance on him in the big leagues. Sabo was clearly not comfortable with the Hall of Fame honor, even saying that his favorite thing about the night was that the weekend would be over, but he tried to make the best of it and say thanks to all involved. As Marty Brennaman said, "There are only two people that I know who have absolutely no ego - Joe Nuxhall and Chris Sabo." And Marty knows a thing or two about ego.

Maybe it was just my mood going into the night, but I felt like the Reds put on a near perfect event last night. There were a couple of items that felt out of place - the live auction at the end of dinner was unnecessary - but all in all, it's another in a long line of recent events put on by the Reds that I would consider a glowing success. It's like I talked about a couple of weeks ago, there are lots of signs that this organization is starting to move in the right direction. I almost feel like we're seeing them turn into a first class organization right in front of our eyes.

NOTE: I suggest you check out OMGReds.com for more highlights from the event. They had better seats, better cameras, and they actually took notes.