Finest Moments of the First Half

Share All sharing options for: Finest Moments of the First Half

Now that you have voted for the best minor leaguer of the first half and the Joe Nuxhall Memorial Star of the first half, we of the Reposter staff ask for your opinion on the greatest moment of the first half. With the Reds surprisingly in first place at the break and looking surprisingly capable of staying there, there have surely been a number of memorable moments. If only it were 1981 - the Reds would be in the playoffs. 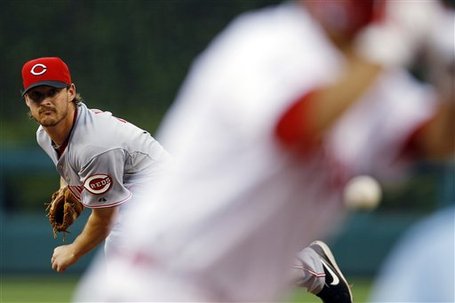 In just his 3rd career major league start, Travis Wood faced the daunting task of keeping the Reds in the game against Roy Halladay, perhaps the second-most daunting task he's faced so far in his young career (the most being the futile struggle against all the penis jokes). Not only did he keep the Reds in the game, but he sat down the first 24 batters he faced until Carlos Ruiz doubled in the top of the 9th. That would be the only Phillies batter to reach safely off Wood. He would be relieved after posting a line of 9 innings, 1 hit, 8 Ks, and a game score of 93. Unfortunately for him, Halladay had a fine game of his own, throwing 9 innings of shut out baseball, too. The Reds would lose 1-0 in the 11th, but Wood opened some eyes with this one. It could earn him a spot in the rotation in the 2nd half. 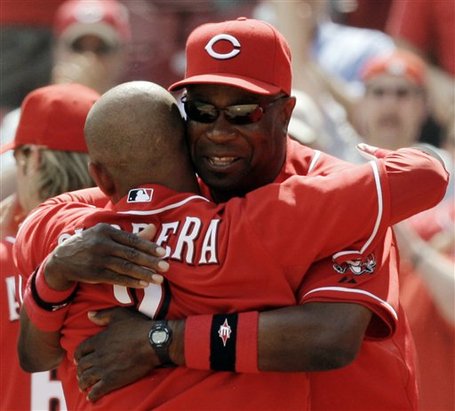 The Reds had spent April treading water right around the .500 mark, once dropping to four games under but getting no higher than two games over. On May 5th the Reds banged out 12 hits against Jonathon Neise in six innings, only to be squelched by the Mets bullpen. Francisco Cordero came out to close the game in the 9th nursing a one run lead, but a few singles and a sacrifice fly tied up the game at four. Moving to the 10th, the Reds had not had a runner on base since the 5th inning. Cabrera led off the inning with a screamer down the LF line that found the seats. The win would begin a 10-2 run for the Reds, leaving the .500 mark in the dust. 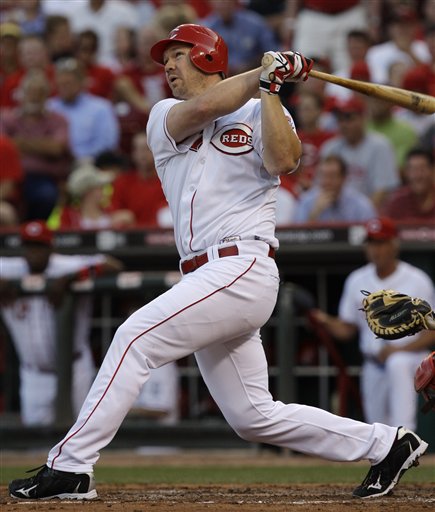 I make sure to remind myself everyday just how wrong I was about the Scott Rolen trade. He's been so valuable to the team so far this season and he's done so much to make this a winning team, that it was difficult to represent that in a list here. We decided to go with his 300th career home run against the Phillies on June 28th (why are so many of these against the Phillies?). After Joey Votto doubled with two outs in the 4th, Rolen strode the plate in that even, measured manner of his. He blasted the first pitch out to LF, tucked his chin to his chest, and strode around the bases in that even, measured manner of his. Roll on, Scottie. 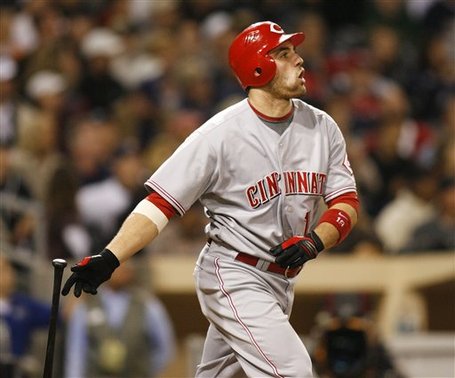 After leaving Seattle having been absolutely silenced by the last-place Mariners' pitching, the Reds were looking to get the bats cracking again. Unfortunately, A's starter Gio Gonzalez kept them silent, throwing seven innings and striking out nine while only giving up a single unearned run. The score was tied 1-1 in the top of the 9th when Jay Bruce laced a single to RF that scored Drew Stubbs. Then, in the bottom of the 9th, Francisco Cordero came in to close the game only to see his first pitch of the inning sent to the seats by Kevin Kouzmanoff. The storm was unleashed in the 10th though as Ramon Hernandez, Joey Votto, and Scott Rolen all hit home runs to run the score to 6-2. The win started a 9-2 run for the Reds that quickly erased the bitterness of the sweep in Seattle. 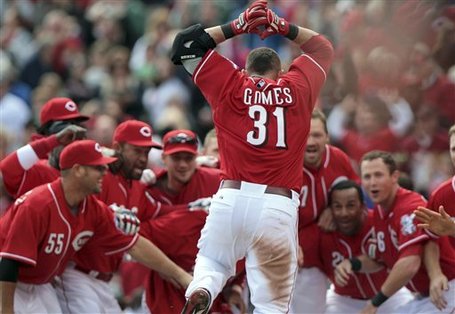 After splitting the first two games of the season with the Cardinals, The Reds were looking to take the opening series against the NL Central pre-season favorites. Brad Penny and Bronson Arroyo matched each other pitch-for-pitch, with Penny going seven innings only surrendering one run. Goodroyo opened the season the same way he closed the previous one, throwing eight innings and allowing a single run. The score remained tied going into the bottom of the 9th. After Jay Bruce popped out, Jonny Gomes roused the hometown faithful from their winter slumber with a thunderbolt to LF. The home run gave the Reds the game and the series, and that one game is the difference in standings right now at the break. 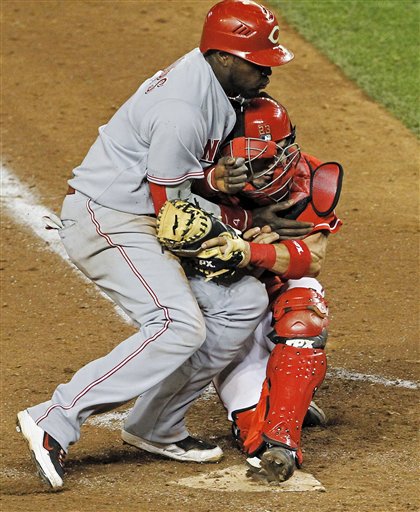 So maybe this wasn't a ballplayers most gentlemanly moment, but Phillips answered the chorus of critics who decry his lack of hustle by emulating the Right Dishonorable Charles Hustle himself. BP dislodged the baseball from Nieves' clutches, scoring an insurance run en route to a 5-1 victory at Nats Park. According to the WaPo, "Nieves took offense to the way Phillips animatedly pounded his chest after he was called safe."

The collision was a flash-point in Phillips' overwhelmingly successful first half - and torrid June, in which he elevated his slash line from .280/.348/.460 to a month-ending .313/.371/.481 (a high-water mark thus on the season thus far). BP was pegged in the ribs later in the game, though Batista maintained it was an accident. All's fair in Love and Baseball. 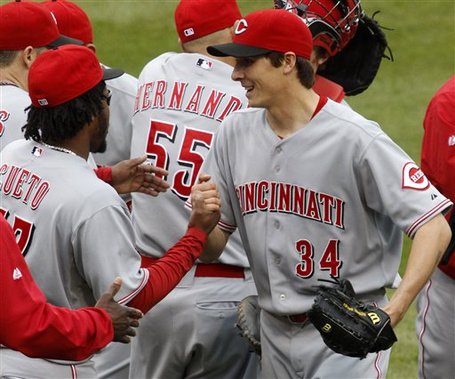 We hate to qualify again, but yeah, OK, both of these gems were hurled against the Pirates. (Still a professional franchise with several players MLB-caliber players under employ, including a highly-touted Scottish import.) Johnny's outing was a few Orlando Cabrera glove-lengths away from a perfect game (1 H, 8 K, 0 BB), with only Ronny Cedeno reaching base on a single in the third. Cueto's command performance was followed the next day by Homer Bailey's 4 H, 6 K, 0 BB effort. While the level of competition in the NL Central is sure to be evaluated on a sliding scale, those 18 innings of scoreless ball were a forceful reminder that this staff is still bursting with potential - worlds away from the lack of legitimate young pitching talent of the past decade. 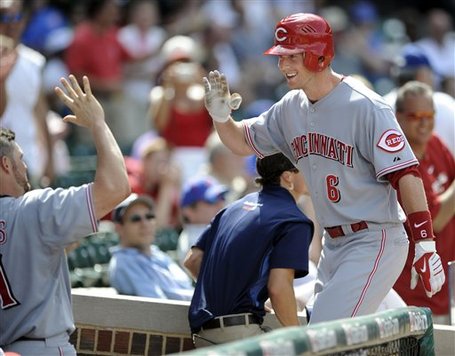 "This is our Independence Day"... from not totally humiliating the Cubs. There was a jet stream out to Waveland Aveas the Reds teed off for seven home runs in the game, paving the way to a 14-3 drubbing of the Cubs. Janish and Stubbs were at the center of the action, with Stubbs picking up the hat trick and 5 RBI, while Janish entered the game at third (with Miguel Cairo moving to 1B) after Votto's early-game ejection and had four hits, including a HR, and three RBI. Something about the Cubs really stokes Joey's fire - and may have helped spark a team-wide fireworks display after he was sent off. 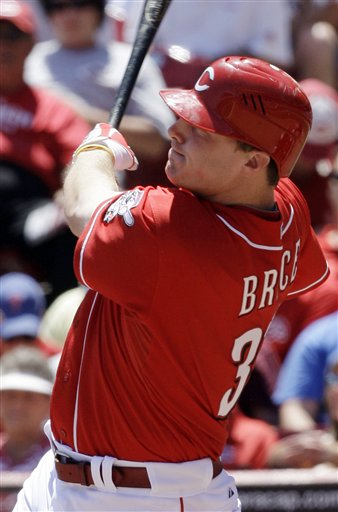 Some observers, Red Reporters included, called this effort against the Phillies' ace D.O.A. And that gloomy forecast looked justified though the end of the fifth as the Reds trailed 3-0. Votto's solo shot in the bottom provided a jolt, but was just as easily cast as another Atlas moment. After adding another run in the 7th, Jay Bruce faced down the dread Halladay in the 8th inning with Jonny Gomes on first base, setting up our Frisch's Huge Boy Huge Play of the Game and propelling the Reds to a 4-3 victory, while handing Halladay the loss and securing a series win over the Phils. It should also be mentioned that Aaron Harang, aside from one mistake pitch against now-recently-DFA'd Dane Sardinha, threw a solid 6 1/3 innings to keep the home team in the game. 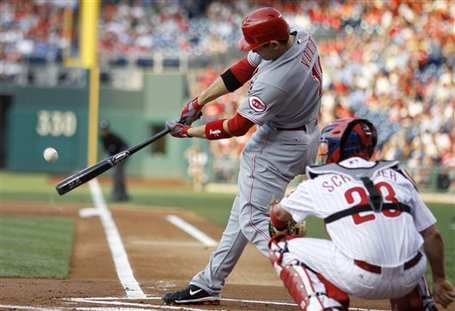