Joey Votto and Arthur Rhodes. Votto didn't do much this game, though he did have an RBI to tie the game at 3-3. Rhodes also had an uneventful night. But both kept their streaks alive, so they get the award. Votto has now reached base safely via a hit, walk, or hit by pitch in 34 straight games, the most by a Reds player since Dave Collins in 1981. Rhodes made hiss 33rd consecutive scoreless appearance, tying the big league record held by Mark Guthrie and Mike Myers. On a night that was a total team effort, we'll give these guys some glory. 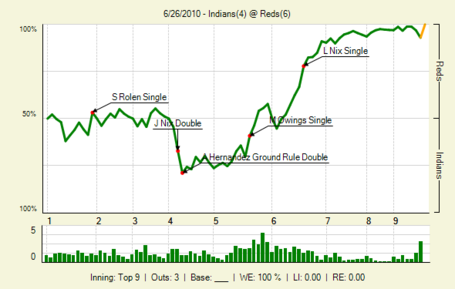