Father's Day Reflections: Why do we share baseball with our children?

I'll go ahead and say: this will probably be longer, more personal, and with fewer statistics than anything I will ever write here.  But it's Father's Day--what better time to talk about the things we have shared with our fathers?

But first let me explain.  I've been thinking about why we continue to share in the joy and despair of sports, and why we pass these things on to our children.  Many of us grew up sharing baseball with our fathers (or mothers, though that is a different holiday...), and it seems to me that much of why we do that boils down to what the sport represents.  We teach our children sports to pass on lessons, and through sports we end up learning about ourselves.  I'd just like to share a few ways that my father and I have shared in those lessons from baseball.

I recently read something that reminded me (in a roundabout way) of baseball: why we watch, why we care.  It comes from Jonathan Safran Foer, writing about the time right after the birth of his son:

A few days after we came home from the hospital, I sent a letter to a friend, including a photo of my son and some first impressions of fatherhood.  He responded, simply, "Everything is possible again."

I don't take this to mean that plenty isn't possible for us adults.  Of course life is full of possibility: growth and renewal, or at least redemption, seem always possible.  But as adults, we continually make decisions that close off possibilities.  Not for stupid reasons; indeed, failure to do so would limit us far more.  Other possibilities are closed off for us, for one reason or another.  But Foer's friend reminded me of what new life represents.

We have lots of traditions to pass down that represent these things, but somehow for me, baseball was one of the most important.  My father, after all, was a Braves fan for years, including those horrible years in the 1980s.  And yet he kept hoping that this would be the year they could shake the malaise and accomplish something.  Sure, they did eventually, but that wasn't the point.  The point was, we find ways to remind each other to keep that hope--even Cubs fans--and we realize the importance of passing these things on to our children.

Baseball is by no means the only thing that is reborn each year, but this doesn't change how I am inevitably overcome with the promise of every new season no matter how cynical I try to be.  After all these losing seasons, I am still a Reds fan because that same promise comes around every year: everything is possible again.

As I stood around in the outfield during games, my father loved to yell in my general direction: "Look alive!"

I'm sure I wasn't paying attention.  But I eventually realized that through sheer repetition, he was trying to get through to me something that I tell all of my students these days, something along the lines of: so much of getting things done is just showing up and trying.  He took care of making sure I showed up, but he wanted me to want to try, too.  And sure, I was absolutely horrible--but if he got me to run after that fly ball as it bounced away after I failed to catch it, he would have taught me something.

My father was away on vacation, unreachable, the week of the Armando Galarraga near-perfect game.  I wanted very much to call him, even though I knew exactly the discussion we'd have.  We would have talked about how umpires aren't perfect, probably noting that they should be able to review calls like that.  We would have discussed the amazing catch by the center fielder for the first out in the ninth.  And we would have ended by talking about the reaction by Galarraga to the blown call.  First he looked surprised, then he just smiled and went back to work.

So much in baseball is about luck, and so much of it is inherently unfair.  And yet we teach it to our children--perhaps hoping that they'll learn something about the unfairness of life through it all.

I'm pretty sure I would have said something profane had I been in Galarraga's position, but if I had responded anything like the way he did, I could pin that on my father.  After all, he tried his best to teach me to respond to adversity--to the great unfairness of it all--in a dignified (or, you know, sportsmanlike) way.

I don't know how much he succeeded there, and I'm not sure if he ever really got me to try very hard in the outfield.  But there are still times when I find myself, in his words, lollygagging.  Some of those times, I hear him yelling at me: "Look alive, Gray!"

Baseball has always been the sport of choice in my family.  I never played much football or soccer, and even though I was a pretty tall kid I never got much into basketball.  Part of it was that nobody ever showed me how to shoot, but I probably wouldn't have been particularly good at it anyway.  I wasn't the most coordinated kid

My father had me playing baseball at an early age, though of course, I wasn't particularly good at it.  When I played tee ball and then in a league with a pitching machine, I was generally stashed in right field.  I'm pretty sure that I could be counted on to misplay the one or two balls that were hit my way in a game.

I quit baseball in fourth grade to, of all things, sing.  I joined a boys choir that practiced extensively on the weekends, and I couldn't do both.  I chose the one I was at least marginally good at.

I'm pretty sure that my father was disappointed in my choice.  He had kept playing for a while.  My impression was that he wasn't particularly talented, but he played hard and was decent enough until pitchers consistently threw curveballs for strikes.  Then he was a hopeless hitter.  He's stayed around baseball, though, and continues to umpire games several times a week.  Unlike him, I bailed early and never looked back.

My parents divorced around the time that I entered middle school.  In the shuffle back and forth between houses that never really felt like homes, I drifted away from both parents.  And soon I did what teenagers do, building walls in the space I had created.  Eventually, though, I went away to school and didn't have to work so hard to maintain those walls.  At some point I realized that I'd rather not have them.

That's when baseball became the link for us.  When I called home my father would quickly run out of things to say to me and would turn to baseball.  At first, I didn't know what to make of it.  Sure, I had paid attention to baseball back when I lived at home, watching games on TBS and WGN whenever I had the chance, pulling for the Reds for no particular reason.  I hadn't done that in years, but I soon got back into it.  Not much, just checking scores, reading a few baseball headlines here and there.  But as different as we had become, as distant as we were, we could always fall back on baseball when we talked.

I feel like I've become more like my father in some ways, and in many others he's actually become more like me. We have more in common than baseball these days, but it's always there if we need it.  And that's what it became once again when he noticed that the Reds were playing a two-game series in Atlanta.  We made plans to drive down, take in the night game, spend the night, see the day game, then drive back.  He mentioned this to his father, who also wanted to come down from Tennessee.  He in turn brought my cousin from Chattanooga.  It was actually a repeat of the trip we took for my fourteenth birthday: the four of us met up in Cincinnati (the first time I had ever been) and caught a few games at Riverfront.  That was when I got a Reds cap, the only piece of Reds gear I still have.

But back to the recent past: that week, baseball gave me ten hours of talking to my father in the car.  It also gave me a chance to see the grandfather I hadn't seen in several years.  He spends much of his time taking care of my grandmother, whose health is...very poor.  So they don't travel much these days, and I just haven't gotten over there.  So it goes.

He's 73 this year, which hadn't hit me until I saw him that week.  He was grumpier than I remembered, but more than anything he seemed to have aged much more than I expected.  We only had to walk across the street from our hotel to the stadium, but on our way to our seats my father and I noticed that even though we weren't walking especially fast, he was lagging behind us.

Perhaps that was why the loss in that second game hit me harder than it should have.  Sure, Votto hit a grand slam.  But as we all remember, it all came crashing down, culminating in that walkoff grand slam.

Maybe more than anything, it was a reminder that I haven't exactly been doing my best to enjoy those Votto home runs with him before, more inevitably than a Dusty-induced bullpen meltdown, we won't have any more chances.

Baseball reminded me of that. 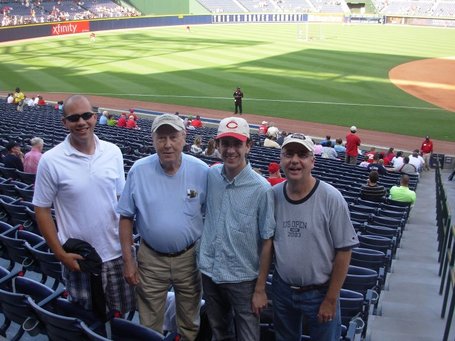