What's Up With Attendance Being Down?

Share All sharing options for: What's Up With Attendance Being Down?

Yesterday on Twitter, Jamie Ramsey posted the attendance number for the day's game, to which I responded:

Ramsey's response was a less than enthusiastic: "I could stand to see a few more, but it's not bad."

I thought, hmmm, that's a little bit of a downer attitude. I thought 25k on a Thursday was a good sign. Fans were still coming out to the park despite the team struggling of late. Then I looked at the numbers overall. It turns out, there is no "still" about it. Fans have not been coming out to the park this year, despite the team having been within at least one game of first place for 34-straight days, the longest such stretch since 2002. In fact, 2010 is on pace to be the worst year of attendance in Great American Ball Park's history (click for larger image): 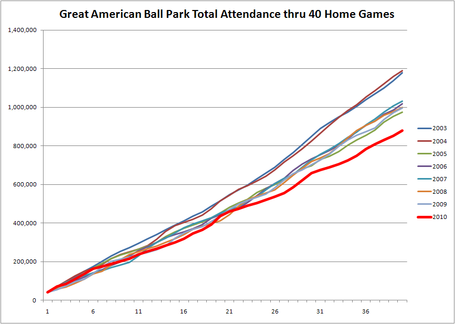 Attendance in 2010 is 10% lower than the previous worst number for GABP in 2005. Honestly, this is shocking to me. I didn't expect the Reds to have their best attendance ever so far, but I sure didn't expect the worst. In 2006, when the Reds were desperate for more fans to come out to support their somewhat competitive team, they had drawn over 140,000 more fans after 40 games. That's 3500 a game. What gives?

I know the economy isn't hot, but MLB attendance is only down about 1% from 2009's numbers. The Reds, however, are down 12% from last year after 40 home games, and that team was 40-40 and were in fourth place, trailing the Cardinals by 3 games at that point. And it's not like the economy was sizzling in 2009 either.

The only thing I can think is that the Reds have played 40 home games in their first 67 games this year. Last year, they didn't play their 40th home game until July 5th. In 2008, it was July 1st. Same with 2007, and in 2006 it was a day earlier. However, in 2005, their next worst attendance at this point, they played home game #40 on June 20. Maybe the Reds are getting screwed a bit, attendance-wise at least, by having to play so many home games too early in the season, before people have had time to build enthusiasm about the team or get their summer schedules rolling?

This still doesn't explain why we're looking at the worst attendance ever at GABP. In 2005, the Reds were just 27-43 after 40 home games and were already 18.5 games out of first place, but they drew more than this year's team. I really don't have a clue why attendance has been so bad. I thought people had more enthusiasm about the Reds this year, but it doesn't appear to be translating to the turnstiles. Maybe things will be different if the Reds can come home from the west coast in first place still. I'm sure the Reds' brass have their fingers crossed, but I honestly don't know what to expect.

Attendance figures are from Baseball-Reference.com.