]The Hall of Fame Zone Revisited: Career Arcs - Beyond the Box Score

The WAR graphs that arrange a player's seasons from best to worst and compare trajectories are a favorite tool of mine to assess a player's overall career, especially on questions like whether they are deserving for the Hall of Fame. But I've always wanted a way to do it that doesn't require one to completely scramble up a player's career seasons. Justin Bopp steps forward and de velops this new approach, using a fourth-order polynomial to calculate a best fit line. The inclusion of the hall of fame zone is what really makes it useful, as you can compare where a player is at what point during his career compared to typical hall of famers. 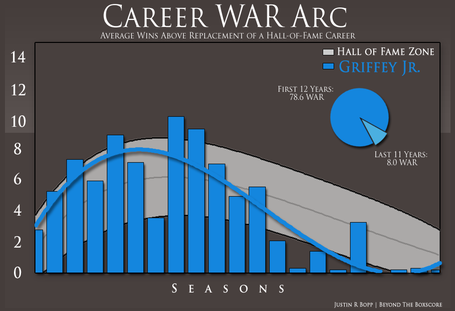 When a pitcher meets a hitter | Hardball Times

David Gassko revisits my game theory article from a few months ago and expands/corrects it. The key point that keeps getting driven home to me with these studies is that, generally speaking, the run values of each pitch should be more or less the same. Better pitchers will average better run values than poorer pitchers, but if a pitcher is mixing his pitches optimally, all pitches should have roughly the same value. This is one of the many reasons that I think studies that try to rank pitches based on pitch run values are missing a key point--the run values tell you more about the quality of the pitcher or the way he's mixing his pitches than the actual quality of a given pitch. And that's why Tim Wakefield's 72-mph fastball is a plus pitch...

As bad as some of the Reds' contracts have been recently, they rank about average in terms of money paid to players not on the team. And releasing Mike Lincoln, if that happens, won't really make much of a difference. The worst four teams are driven by 5 massively bad player contracts. At least the Reds haven't screwed up as badly as that. So far.

Nick Steiner has my favorite look at Strasburg's first start using pitchf/x data. Great job breaking down the pitches, showing why they were special, and pointing out the one potential weakness in his performance: location. Just think: he can get better! :)

Double-digit K’s in a MLB debut | The Hardball Times
Strasburg's 14 K's are the 3rd most for a debut since 1920. Tied for 12th on the list are Johnny Cueto and Aaron Harang with 10 K's.

Is the BIS data right? | The Hardball Times

Ricky Zanker gives us a heads up that some of the strike zone/swing% data we get from fangraphs (who get it from BIS) might not be consistently collected from year to year. That's the problem when you let humans classify things...

Baseball Prospectus | Ahead in the Count: Production and the Draft

Great breakdown from Matt Swartz on where the value comes from in the amateur draft. As with previous draft studies, clearly it's not a complete crapshoot despite the draft's reputation. And it's the first round that matters the most. The second table is the most amazing to me: if you pick after #25, you're hurting. The difference between #8 where the Reds picked last year and #12 where the Reds picked this year is pretty small, however: 3.9% of WARP vs. 3.2% of WARP (number of % of all WARP generated from the first round).