Can we expect Scott Rolen's Power to Continue?

Share All sharing options for: Can we expect Scott Rolen's Power to Continue?

Going into the 1990 season (good lord, this guy is shameless), Chris Sabo had never hit more than 12 home runs as a pro. His major league high was 11, which he hit in his rookie season. At the age of 28, there was already talk of Sabo being washed up or a flash in the pan.

And then he met Lou Piniella.

Piniella worked with Sabo to refine his swing - people forget that Piniella was a helluva hitting coach. Piniella told Sabo in Spring Training that with these changes that he'd made to his swing, he'd hit 15 home runs by accident. Piniella was right. Sabo hit 16 home runs...by the All-Star break.

Unlike Chris Sabo, Scott Rolen has a history of being somewhat of a power hitter. From 1997-2004, he averaged 28 home runs a season and a .524 slugging percentage. However, his power since 2004 has been much more Sabo-esque, averaging just 11 home runs a season and a .448 slugging percentage coming into this season. A lot of that had to do with injuries - Rolen only averaged 111 games a year from 2005-2008, though his average HR per 162 games in that span was still only 17. A back and shoulder injury had sapped much of his power, which is a big reason many of us where less in favor of the deal to acquire him last season.

Rolen appears to be healthy this year though, and it looks like his power is back, so far at least. His 14 home runs and .601 slugging percentage have him on pace for his best season since 2004, when he hit 34 homers and slugged .598 for the year.

The question is: can it continue?

Unfortunately, there are reasons to be concerned. For one, 17% of Rolen's fly balls have ended up as home runs. This is largely considered a "luck" stat, meaning there is not really an indication that changes in the HR/FB rate are attributable to a change in skill. That's not to say that the difference for Rolen is strictly luck-based. From 2005-2009, his HR/FB rate was consistently below 8%, except in 2006 when it was closer to the league average at 10%. This is likely because of an injury. We'd expect a power hitter to be up over 11% typically, if not a bit higher. We would not expect him to be up to 17% though. This is one reason I foresee a drop in home runs as the season progresses for Rolen.

Then again, he does play in Great American Ball Park. More after the jump...

The fantastic site called Hit Tracker uses estimated ball velocity, launch angle, and park effects such as wind and other atmospherics to estimate the "True distance" of a home run. The site then labels the home run as "No Doubter" (home runs that were well over the fence - by at least 50 feet and at least 20 feet off the ground), "Just Enough" (home runs that barely made it - less than 10 feet over the fence or less than 10 feet or so past the wall), and "Plenty" (everything else). Scott Rolen has hit 6 just enough home runs this season, which is tied for the most in baseball. This is somewhat of a GABP effect (4 of the 6 JE home runs came in Cincinnati), but regardless, it's not something that leaves me confident that his power surge will continue.

Of course, GABP can make players look like power hitters even when they are not (right, Brandon Phillips?). The good news is that, based on Hit Tracker's work, and the fine folks at Capital Avenue Club, we can see that all of Rolen's home runs this season would have at least been out of GABP (and 2 other parks - Citizen's Bank Park and Minute Maid Field): 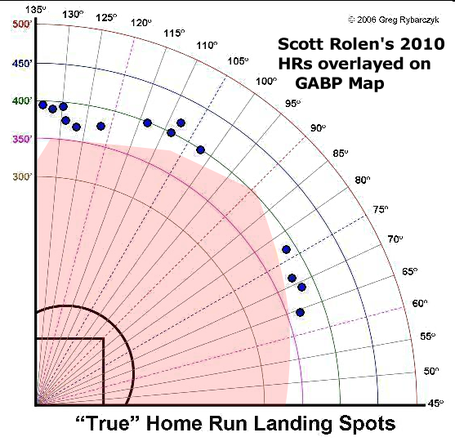 For instance, if you put all of his home runs in Kauffman Stadium in Kansas City, things don't look so good for Scotty. Rolen would lose at least 5 HR in KC, if not 8: 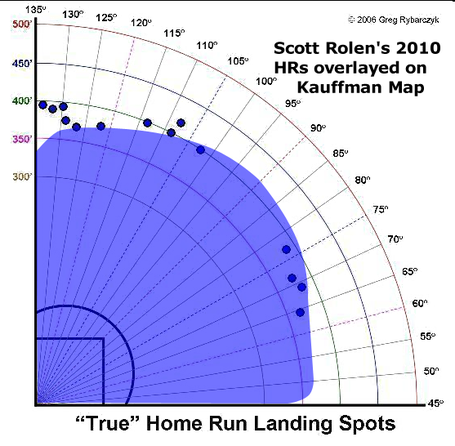 Strangely enough, he wouldn't have fared that well in Coors Field either, where he almost assuredly would have lost 6 of his 14 home runs (assuming all of the games were played there): 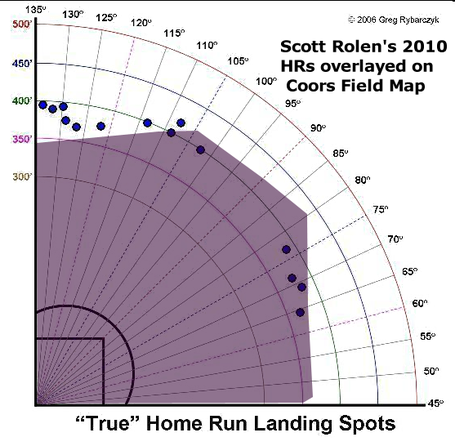 Granted, this sort of evaluation does not take into account fly balls that would have turned into home runs in other parks, but the point I'm trying to make (and that you all know already) is that Rolen will likely continue to benefit from playing at Great American Ball Park. We'll probably see a few GABP-specials out of him the rest of the way, but I'm still not convinced that he's going to hit 30 home runs this season. Luck has a way of evening out. I wouldn't be surprised though to see 25, which coincidentally the number that Chris Sabo hit in 1990.