Tonight's honors will be shared by two players, Jay Bruce and Ramon Hernandez.  Each hit two home runs.  Jay Bruce added a single to go 3 for 5, and Ramon hit two singles to go 4 for 4.  Pretty decent nights for both.

Honorable mention goes to Aaron Harang, who pitched 7 innings and gave up only one run.  He struck out four, walked two, and gave up four hits. 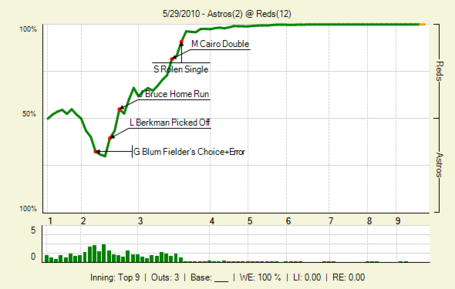 We here at Red Reporter spend lots of time finding out about stuff that other people are doing, and we've stumbled upon this roll call of the top commenters of the night (as of writing this).  Since it's Saturday night, I like to call this the Biggest Loser List.