Is Dusty Over-Using His Bullpen?

Share All sharing options for: Is Dusty Over-Using His Bullpen?

(This post was written prior to the completion of last night's game, and therefore does not include those appearances)

On Sunday, I wrote a post examining the degree to which Dusty was using his bullpen "optimally."  By this I meant whether Baker was using his best relievers in the highest-leverage spots in each game.  This is not always the case with other managers, but for the most part I concluded that Baker is using his best guys properly.

But I missed something.  As many helpful commenters noted, the issue may not be whether Dusty's using the key guys in key spots, but whether he's over-using those key guys.  I thought I'd take a look at that question here.

Below are three graphs reporting the distributions of appearances, innings, and batters faced for 2009 relievers. Three things:

1. This sample includes all MLB pitchers who appeared EXCLUSIVELY as relievers in 2009--it omits anyone who made a start.

2. I've shaded bins in the top 5% of usage.  Please note that this is completely arbitrary--I have no idea whether being in the top 5% of usage is a bad thing in terms of predicting injury or loss of effectiveness.  IF you think that over-usage could induce such problems, however, those shaded regions are probably where you'd expect to see an effect.

3. I've added the last name initial of relievers for the extrapolated games (based on usage so far), innings, and total batters faced by Reds relievers in 2010. For example, Cordero (C) has thrown in 24 of 44 games thus far (55%), and so his extrapolated games pitched in 162 games is 88 games. 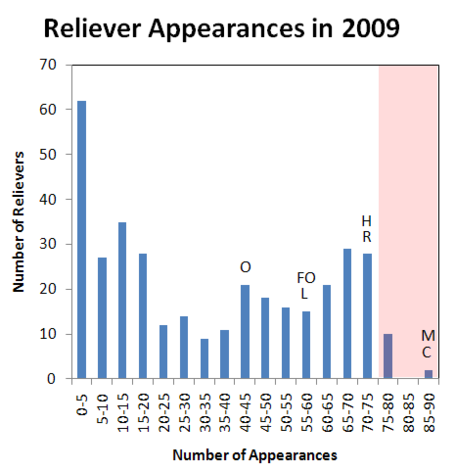 Extrapolated 2010 Masset and Cordero show up in the largest bin.  In 2009, only two pitchers made more than 85 appearances. 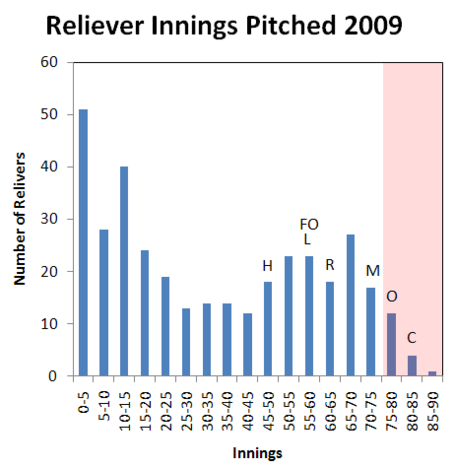 Extrapolated 2010 Owings and Cordero show up in the upper 5% bins.  Owings is a long man, with fewer, long appearances.  I'm not particularly worried about him.  Cordero, though... 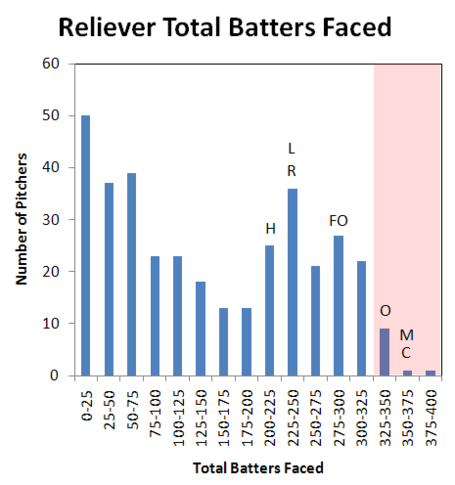 Extrapolated 2010 Owings, Masset, and Cordero all show up in the upper 5% in batters faced (using 2009 distributions).

Now again, I want to repeat, I have no idea whether being in the upper 5% of any of these graphs increases risk of injury or loss of effectiveness.  It makes sense that it could, but then again, previous studies looking for this kind of effect (like in The Book) have had very little luck identifying any indications of reliever workload causing decreased performance.

That said, I'm personally not comfortable using Cordero--a 35 year old pitcher who relies on velocity and stuff--at a rate that is in the upper 5% of all pitchers.  Obviously, the Reds need to be using Cordero whenever the game is on the line unless he is absolutely exhausted.  I would not argue against using Cordero in any of those situations.  But are there other situations where Baker could potentially have avoided using him?   Here's a histogram showing Cordero's gmLI (leverage index when he entered the game) so far: 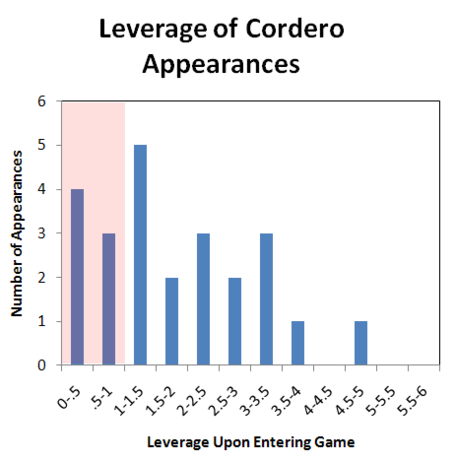 A leverage index of 1.0 is a situation with average leverage.  Perhaps a good rule of thumb is to avoid using your closer in situations with below-average effects on games?  Of Cordero's 24 appearances, seven have involved him entering the game with a leverage index less than 1.0.  Let's look at them:

This was the second game of the season.  As I remember, Cordero just pitched to get in some work, as he hadn't thrown in a game situation in quite a while.  I have no problem with this--makes sense that guys need consistent work to stay sharp.

This is one of those easy 3-run saves.  It could reasonably be omitted from Cordero's load.  That said, it had been three days since Cordero had thrown, and he'd only pitched one time in the previous six games.  I don't have a problem with using Cordero in this case.

Ok, here he's pitching with a four-run lead.  Not a fan of this one.  The only saving grace is that this was the day after an off-day, and "only" the second time in five days that Cordero had pitched.  The problem is that this was the start of a streak of four consecutive games that he threw.  Dusty couldn't have known that at the time, but still...four run lead.

Cordero wasn't going to be used in this game, except that Masset had started the inning and promptly gave up a 2-run homer to Lance Berkman.  Masset had just struck out Feliz after Berkman's home run, but this may be one of those situations where Cordero was asked to warm up after Berkman's shot and so Dusty decided to use him as soon as he was ready.  I'm not super upset about this one--Masset had already faltered, and the Reds needed the win.  But at the same time, it was a 3-run lead and there were only two outs to go...

Danny Ray Herrera was given the opportunity to start this inning, but he ended up giving up two runs and needed to be relieved.  I have no problem with this one--you can't let them get back into the game, and here the tying run was on deck when Cordero entered.  Furthermore, Cordero had only pitched once in the prior six days.

This is a classic three-run save.  Cordero had pitched the day before, and twice in the prior four games.  I don't love this one, but this was the day after that horrible loss in Atlanta.  I don't mind Dusty cementing the win given that context, not to mention giving Cordero a chance to redeem himself under a relatively low pressure situation.

Here's the second time that he's pitching with a four-run lead.  It was the third day in a row that he'd thrown.  There was going to be a day game the next day.  I can see absolutely zero justification for this.  This is the worst use of Cordero of the year (and, of course, he ended up giving up a pair of runs, so it wasn't like there was a good result either).

So going through that list, there were two appearances that seemed to be particularly bad uses of Cordero: #3 April 27th, and #7 May 22nd.  Most of the others are marginal (if they weren't, their LI would have been higher), but to me were justifiable given the game situation and/or Cordero's recent usage at the time.

What happens to Cordero's record if we omit those two appearances?  He drops to 22 games, 20 IP, and 88 TBF, which extrapolates to 81 G, 74 IP, and 324 batters faced on the year.  That's better.  It gets him out of the "red zone" for both IP and batters faced, though he's still up there in extrapolated appearances.  Best part is that it's a pretty easy rule to follow, and one that I don't think anyone can take issue with: Cordero shouldn't pitch with four-run leads!

If you want to go further, I can see instituting one additional rule: Cordero doesn't pitch on more than three consecutive days.  There's only one appearance that this would affect: April 30th, a high leverage appearance in which Cordero pitched the bottom of the 9th to save a 1-run game.  ... although if we already followed our "No 4-run Lead Appearances" rule, this fourth game in a row would only have been the third game in a row, because he wouldn't have thrown on April 27th.

So that's really all I have.  Two games.  Everything else seems like reasonable use to me.  If you're going to omit anything else, I think you need to target the three-run, start the inning saves.  ... and in reality, when saves are so important to closers (the main reason why I despise saves as a statistic--give me shutdowns!), I don't see that happening.

Might I suggest targeting appearances with gmLI < 0.5 (those with asterisks above)?