Turning the lights back on for first place! Reds beat Pirates 7-5.

Share All sharing options for: Turning the lights back on for first place! Reds beat Pirates 7-5.

Drew Stubbs. The speedster had three hits including a double and a home run and drove in 2 runs. He's batting .291/.371/.545 since Dusty Baker moved him out of the lead-off spot for good on May 7. Honorable mention to Orlando Cabrera, who also had 3 hits, and Arthur Rhodes, because he's a bad mofo. 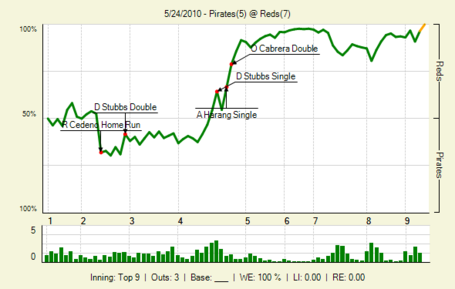