Is Dusty using the bullpen sub-optimally?

Share All sharing options for: Is Dusty using the bullpen sub-optimally?

Over the past several decades, bullpens have become increasingly specialized.  The current dogma seems to be that each pitcher should have a specific role, which generally seems to revolve around pitching in a specific inning (especially for setup guys and closers).  There's a sense in which this gets away from what should probably be the number one law of bullpen management: Thou Shalt Use Thy Best Relievers in the Most Crucial Situations.

While it certainly is the case that the 9th inning is, on average, the most crucial inning of a ballgame, this is not always the case.  What I wanted to do here is see, at least for our Reds so far this season, whether Dusty's fairly by-the-book bullpen management is demonstrably sub-optimal.

First, here's a list of Reds relievers and (prior to Saturday's game) the average leverage index at the time each entered the game this season.  Leverage index is a measure of how important a particular plate appearance is to a game.  The average event has a leverage of 1.0, whereas Shin-Sho Choo's Plate Appareance vs. Cordero last night with men on the corners, 1 out, bottom of the 9th had a leverage index of 4.79.  The highest leverage index upon entering any game this season for a Reds reliever is 5.66, so there's a rough upper-bound.  Note that leverage index only tells you how important a PA is to a game when that PA begins--it knows nothing of the outcome of that PA!  It can be thought of as the pulse of the game.

With the exception of Ondrusek, I don't find much to complain about here.  Cordero's leverage index when entering the game is higher than any other reliever.  That's as it should be, because closer, he's supposed to be the best reliever in the pen.  The lefties, which will tend to be used in key spots against left-handed batters, take second and third, with Rhodes used in higher leverage spots than Herrera.  Masset ranks highest among the righty non-closers (again, except for Ondrusek), followed by Lincoln, Owings, and Fisher.  All seems appropriate to me.

Those are just averages, of course.  How about game-by-game?  Here's a graph, inspired by one by Jeff Zimmerman a few weeks back at Royals Review: 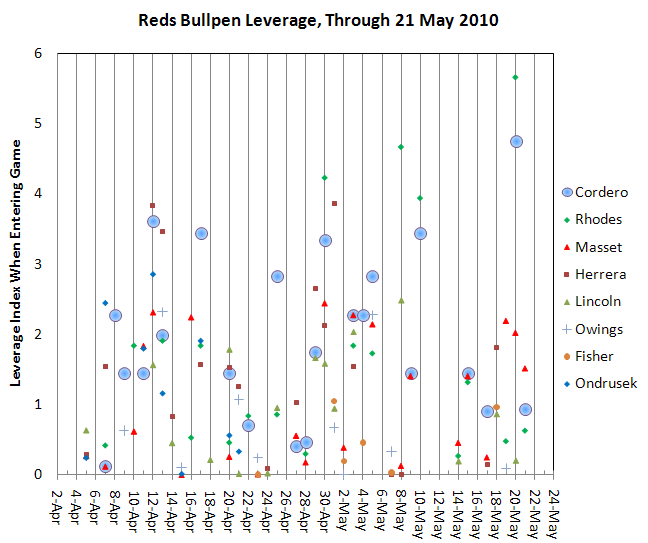 It's a busy figure, but for any given day you can see the leverage index when any given reliever entered the game. Every other day gets a vertical line just to help you keep track of the individual days as you work through the figure.

Here's what I see: for the most part, Cordero gets the highest leverage opportunities.  But when he doesn't, it's Rhodes that does (mostly).  And because, most of the time, when Rhodes comes in, it's to face a lefty hitter, you can make a very legitimate case that Rhodes is the best reliever available in that situation.

Overall, I'm finding it pretty hard to find things to complain about.  There have only been four instances in which a right-handed reliever other than Cordero has entered the game with a leverage index of 2.5 or higher, which is a decent cutoff for high-leverage situations: Ondrusek (April 7th, 12th...I will say that he was most definitely not used appropriately), Masset (April 30th), and Lincoln (May 8th).  And in two of those games, Cordero still appeared in the game at an even more crucial event later on.

I could go through all the game logs and find things to complain about.  And maybe some of you will do so in the comments (which is fine).  Try to keep in mind, however, that it's easy to play monday morning quarterback after the fact, and that during a game you do not always know what your needs will be later in a game--and that has to factor into your decisions.  Furthermore, also keep in mind that you have to have relievers warmed up to enter a game so that you may use them.  Sometimes a crisis will occur so quickly that it might not be possible to get your ideal guy ready in time to deal with it.  I'm sure that there are ways in which bullpen leverage could be improved under Dusty's reign.  But overall, my impression of his tendency to leverage his relievers in appropriate spots is fairly positive, despite Dusty's general adherence to the "closer only pitches the 9th in save situations" dogma.