Share All sharing options for: Just for Fun: Could this be 1962 all over again?

This post is strictly intended to stoke your imagination. It is my belief that we should fully enjoy first place, and any relevant games, while they last. This season could go in the tank, or it could be a memorable one. The likelihood is that this is probably at best an 85-win team, but what fun is dreaming if you don't dream big every once in a while! Hope springs eternal!

So, just for fun, I was looking for similar teams to this current crop of Reds based on their pythagorean record and their actual record, just to see if there are any indicators for the future. When perusing the list of similar teams, I came across the 1962 Reds, who were 21-16 after 37 games, and who had scored 173 runs while allowing 183 to score (the current Reds are 177 and 178 respectively) and who went on to win 98 games, though they still only managed a 3rd place finish in the National League.

Similar to this year's team, the '62 squad started out slow. They were just 7-11 after dropping the first game of a double-header on 4/29, bu then went 14-5 over their next 19 games. Sound familiar?

Their paths to 21-16 aren't exactly the same, but they're pretty close. Here are a couple of graphs to show you how similar they are: 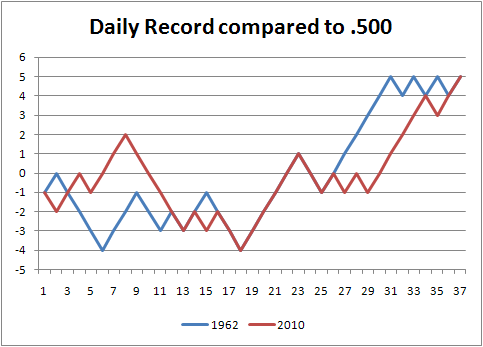 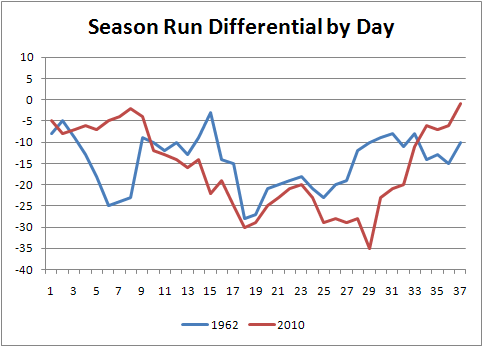 After the jump, we'll take a look at the individual players and imagine what it would take for these Reds to win 98 games!

Offensively, I think this year's squad can come close to the 1962 team, but it's unlikely they'll reach the 802 runs scored that that team put up. Right now, I'd say this team is likely a 760-780 run offense, which is about 4.7-4.8 runs per game. This is higher than what I would have predicted earlier in the season mainly because I've become a believer that Jay Bruce is breaking out this year. Perhaps that's a little premature on my part, but I don't care. This post is all about the optimism!

Where the current squad will really need to pick up their game is on the pitching staff. It's hard to compare these two eras because bullpen usage has changed so dramatically, but the 1962 starting staff was much better than what we have seen from the 2010 squad. The present version has shown signs of improvement, and I think we can be optimistic, but it is still unlikely we'll see three pitchers like Purkey, Jay, and O'Toole, all of whom pitched over 250 innings with an ERA under 3.80.

Anyway, remember, this is all just for fun. The 2010 Reds aren't going to win 98 games. I don't expect anybody to believe that, but it's still fun to imagine the possibilities. We'll get back to baseball reality tonight. But for the rest of the afternoon, feel free to daydream about the possibilities!