Bronson Arroyo.  It was a great day for pretty much all the Reds today, and none more than the Speedwagon.  Bronson pitched a complete game, the third Reds pitcher in five games to do so, giving up only two runs and scattering seven hits and three walks.  He also hit a bases loaded single to drive in two runs.   Honorable mention goes to Scott Rolen. 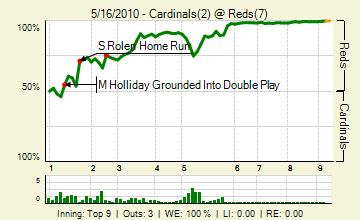