Share All sharing options for: The Reds Might Be the Best Base Running Team in the League

The Reds have had some issues on the base paths this year, that's for sure. They have been picked off more than any other team in the league. Last year's stolen base leader, Brandon Phillips, is just 3 of 7 on stolen base attempts this year. And there are a couple of instances where mistakes on the bases have really ruined an inning.

But I'm here to tell you, this is actually a very good base running team. You may not believe me, which is why I've brought a chart to back me up: 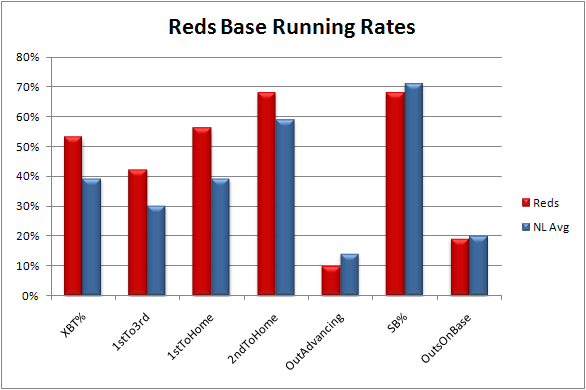 You may not have noticed this, but the Reds run the bases on hits better than any team in the National League. They've taken an extra base (XBT%) 53% of the time this year, a full 8% better than the next closest team. They lead the league in going first-to-third and second-to-home on a single, and they are third in the league in going first-to-home on double. Probably most importantly, they've only made 10 outs while trying to advance an extra base, the third lowest rate in the NL.

They are not without their problems though. Their stolen base rate is a barely acceptable 68%, which is 3% lower than the league average, and overall, they've made 26 outs on the bases (not including GIDP and force outs), which puts them at right about the league average rate. This is mainly because they have not been effective stealing, and they get picked off far too often.

Individually, the best base runner so far has been Jay Bruce, who has taken the extra base on 14 of the 18 chances (78%) he's had and he has made just one out while trying to advance. Joey Votto is second with a 67% advance rate, though he has made 2 outs on the bases. Brandon Phillips has only advanced 50% of the time, but he also leads the team with 6 bases taken on things like fly balls, passed balls, wild pitches, balks, and defensive indifference. And the good news is that while BP has had some trouble with the steals, he has not made an out on the bases otherwise. On the bad side of the ledger is Ramon Hernandez with just a 22% advance rate and a team leading 3 outs made while advancing. Slow catchers are slow.

I don't know about you, but I was actually kind of excited to see this data. This is partly because it reminds me a lot of the 1990 squad, which was a very good base running team and was successful because they kept taking it to teams, never letting their foot off the gas. I think aggressive base running, if successful, is a way the Reds can overcome some of their offensive deficiencies. Sure we'd all prefer they add another quality bat to the lineup, but until then, if they can keep doing the right things on the bases, it will help make the few base runners they have more valuable.