Profiling the Catchers Behind the Plate

Share All sharing options for: Profiling the Catchers Behind the Plate

Inspired by this request from Chris at Redleg Nation, I decided to do a little breakdown of the Reds catchers, to see if there are any tendencies that one catcher shows over the other. One thing I am not doing is trying to figure out who is the better catcher. I'll leave that to you. All I want to see is if there is any strategy trends that one catcher shows more than another. It is much harder to know whether or not one strategy is better than the other. There are too many factors to take into account, some of which I don't plan to look at. Things like batter at the plate, base situation, pitcher quality play a big role in the decisions a catcher makes and the results that come from it.

So, this is more of a fun look than a definitive determination of who should be the everyday catcher. If you are looking for that answer, well, it's obviously Ryan Hanigan. Or Ramon Hernandez. I haven't decided yet.

First, let's take a look at Chris' question: Do pitchers throw inside more with one catcher than the other? Below you can see the breakdown by plate location for each catcher. This does not take into account the height or type of the pitch. All we are looking at is the location of the pitch relative to the plate. Everything has been normalized relative to the batter, so inside means inside, no matter if the batter is left-handed or right-handed. 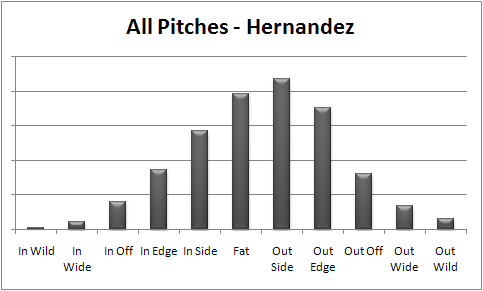 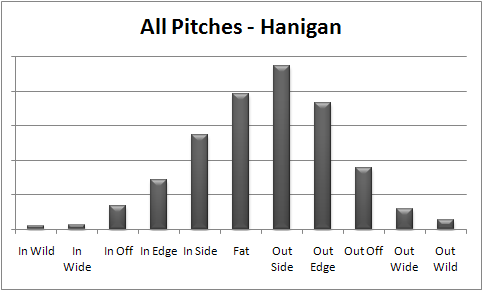 Based on this look, it doesn't appear that there are any differences overall for each individual catcher. They both seem to work the outside portion of the plate considerably more than inside. I imagine that if we looked all pitchers and catchers, we'd find this to be the trend. It is a fairly common strategy to stay away from hitters and avoid their wheelhouse.

After the jump, we'll break it down further.

The following graphs break things down a little further, drilling into the batter handedness, the pitcher handedness, and a little bit about the count (click for larger image):

A couple of things I noticed here was that in general, the Reds work inside much more to lefties than they do to right-handers, regardless of the catcher. I figured this was because the Reds don't have any left-handed starting pitchers, but even the left-handed relievers tend to work inside much more than the right-handers. I imagine that some of this could be a mis-measurement by the Pitch FX cameras, though I doubt it would be consistent enough from park-to-park like it appears to be. The most likely explanation is that the right-handers tend to come in more on lefties because that is the way their pitches move. Better to come inside to far than to try to work the outside of the plate against a lefty only to have the ball float back over the middle of the plate.

Finally, let's break it down by the individual starters:

There's a lot there to digest, so I'll let you take a look and tell me what you see, but here are some quick thoughts on each pitcher: