This is one of the organization's two new affiliates this year, the other being the rookie league club in Goodyear.  Since the Reds left Sarasota for spring training, they also had to find a High-A club to replace the Sarasota Reds.  Lynchburg was the solution, and I for one am glad for the team to be out of the offensive abyss that is Sarasota.  There has been a minor leage affiliate in Lynchburg since 1963, most recently with the Pirates (1995-2009) and before that the Red Sox (1988-1994).  The Hillcats were last year's Carolina League champions, so here's hoping the Reds can continue the winning tradition!

(Apparently, this is a Hillcat) 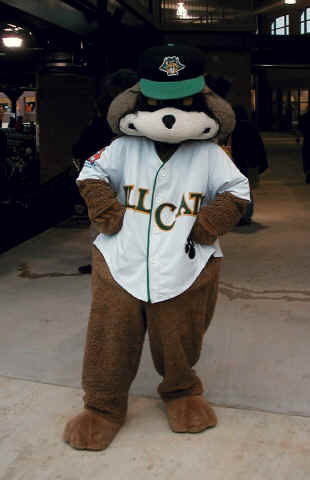 And here are their unis and logo:

Lineups and fun facts after the jump!

City Stadium was built in 1939 and renamed Calvin Falwell Field in 2004.  Seating capacity, including grassy seating/picnic-ing areas, is about 4,000 people. 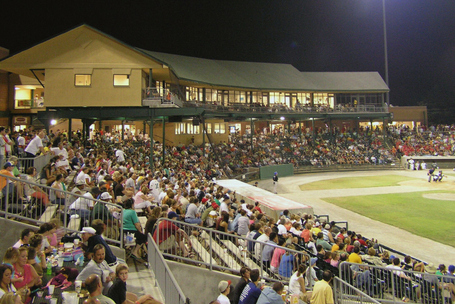 The Hillcats run a LOT of promotions, so I'll hit the high points.

Sundays are "Kids Eat Free" days:  Free food with paid admission for everyone aged 5-14.
Tuesdays are "Kraft Singles Tuesday Night Tickets":  Bring a Kraft Singles wrapper and tickets are buy 1, get 1 free.
Tuesdays are ALSO "Dollar Menu" night: Hamburgers, Hot Dogs, Chips, Popcorn, Peanuts, and Candy are ALL ONLY $1!!!
Wednesdays are "Win-Win Wednesdays": Buy 1 ticket to a Wednesday game, get a free ticket to the next Wednesday home game.
Thursday nights are "Thursday Cheers": $1 Beers and live pre-game music.
Saturdays feature fireworks after every game.

As far as one-off promotions, there are a lot, but my favorite is (Top Pirates Prospect) "Pedro Alvarez Bobblehead Night", Friday, May 14.  That's an Affiliate-Change Fail right there.

Now to the projected lineup and rotation

The Reds have said Neftali Soto will also get a couple starts a week at catcher.

This is an interesting club.  All three outfielders have played CF, so you could potentially have dominating OF defense if all three are in at the same time.  The Reds second pick of last year's draft, Brad Boxberger, could start in the rotation or the bullpen.  If he's in the bullpen, don't expect him to stay in Lynchburg for long.  Another 2009 draft pick, Mark Serrano, is currently on the DL, but he was dominant last season and should enter the rotation as soon as he's healthy.
Overall, Lynchburg looks like a well run organization with an interesting ballpark, a lot of good promotions, and there should also be a good product on the field.  If you live near Lynchburg, VA, make plans to check them out this season!