Share All sharing options for: Ding dong! The witch is dead! Be gone, before someone drops a house on you too! Oh... Reds win, 4-2.

Drew Stubbs.  The kid finally showed what a leadoff man should do, thrown into stark relief by Chris Dickerson's failures at the plate.  After Dickerson left with a strained wrist, Stubbs came in and went 2-2 with a walk, stole two bases, and scored two runs.  A great outing from a guy that's been struggling to get on base.  Honorable mentions go to Joey Votto, Jay Bruce, Laynce Nix, and the pitching staff. 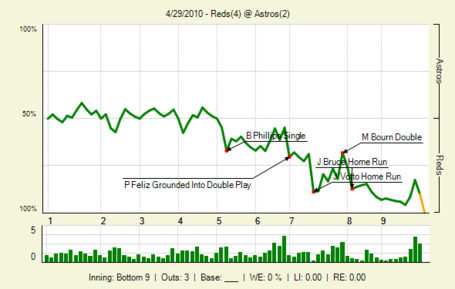