A Quick Look at Baker's Bullpen Management by Leverage Index

Share All sharing options for: A Quick Look at Baker's Bullpen Management by Leverage Index

Inspired by this post from Royals Review about Joakim Soria, I decided to take a graphical look at how Dusty Baker has been using his relievers this season relative to the situation. This graph isn't perfect, but it gives us an idea of who he is comfortable with in high leverage situations. For those that aren't familiar with Leverage Index, here is a quick definition:

A measure of how important a particular situation is in a baseball game depending on the inning, score, outs, and number of players on base.

In the graph below I have indicated the leverage index for when the pitcher entered the game. This only tells part of the story, but I think it is somewhat telling about who Dusty uses in crucial situations. I have highlighted Francisco Cordero (can you tell) to give you an idea of how Baker is using his closer: 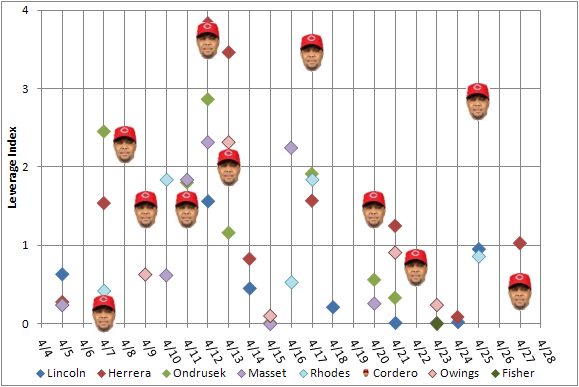 Two things stick out about this graph. One, Baker has been pretty good about using Cordero in high leverage situations, though some of that is a function of the fact that the Reds have won a lot of close games late. When your wins are 2 runs or less, the ninth inning usually ends up being the highest leverage situation in the game.

The other thing that sticks out for me is that Daniel Ray Herrera is being used in some very high leverage situations this season. I'm not sure if this is by design as much as it is likely that a left-hander was coming to the plate in the 6th or 7th inning, and Baker has been saving Arthur Rhodes almost exclusively for the 8th inning this year.

All in all, I think Baker has done a pretty good job of managing the bullpen. The only pitcher I think he put to the fire a bit too much was Logan Ondrusek, who probably saw a few too many higher pressure situations right out of the gate. To Baker's credit though, he hasn't used Mike Lincoln in a high leverage spot yet. Hopefully this has allowed Lincoln to build some confidence in case he is called upon to get some crucial outs in the near future.

After the jump, I have a table listing out the total leverage usage of each reliever.